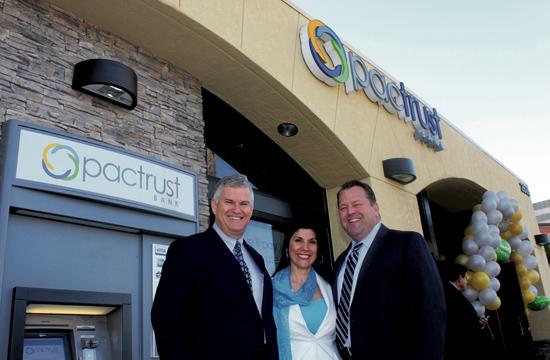 The building that previously housed the Honeybaked Ham Co at 2635 Wilshire Blvd. has been given a new lease on life with the arrival of PacTrust Bank.

A grand opening celebration for the first Santa Monica branch of the bank was held Wednesday with members of the Santa Monica Chamber of Commerce, community officials, and the bank’s CEO Gregory Mitchell.

Mitchell said he was excited for the expansion into the Santa Monica market.

“We see a great sense of community here and a great opportunity for a bank that really cares and gets involved in the community and gives back,” Mitchell said. “This is a great market with great people.”

“Part of the plan was to really grow the bank in the Orange County and LA markets,” Anderson said. “This is the second branch we’ve opened in LA – the first being Century City, which was opened back in October.”

He said one of the bank’s core values was trust.

“We think over the last number of years the banking industry has lost trust to both the consumer and to small businesses,” he said. “We’re building a bank that is building back on trust. We want to create a small community bank that prides itself on service, choice, value, and trust.”

Anderson said the Santa Monica branch currently had seven staff members who all care about its customers.

“This is back to the way it used to be for banking when you walked in and they know who you are and treat you with dignity and respect,” he said. “It’s something we believe in and we know we really have to service people and allow them choices in how they want to bank with us whether it’s mobile banking, internet banking, or whether that’s coming in and actually seeing a person. People want value for their relationship and we’re lucky because we’re an association that is able to offer free checking with the regulatory reform.”

Cangarlu said she and her team were committed to being welcoming to new customers.

“People walk in because they want to bank with a community bank,” Cangarlu said. “That has been the repeated line that I hear over and over. Yesterday I had a client that walked in who wanted to open a checking account. I asked, ‘How did you hear about us?” The person responded, ‘I bank across the street.’ Everyone’s hungry to come back to good old community banking.”

Cangarlu said she brings 25 years of banking experience to the branch.

“I can definitely deliver what they are looking for,” she said. “When people walk in I say ‘Welcome home. This is what you want and you’re going to get what you want.’”