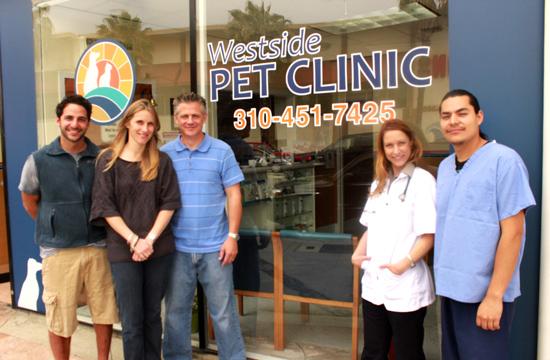 For Dr. Cynthia Hervatic at the Westside Pet Clinic in Santa Monica, emphasizing good health and preventative care are the keys to success for a happy and long life for your dog or cat.

She said it is her goal to take a puppy or kitten through its full lifespan.

“I like to get them early on and start all of their vaccinations and talk to the owner about how best to socialize them,” Dr. Hervatic said. “I’m big on what foods to feed them as well as emphasizing good health and preventative care. This means following up with them yearly for physical exams and any necessary blood work to prevent disease and educate people on what to look for.”

For example, geriatric cats need plenty of attention, she said.

“We have a lot of kitty cats that are getting up there in age and there’s always the big three even if they come in with no clinical signs,” she said. “I tell people here’s what you need to watch for: if your cat starts drinking more and urinating more, we’ve got three major possibilities. They could have kidney disease, they could be hyperthyroid, or they could be diabetic. Those are very common diseases we see in cats that are approaching 10 or over 10.”

With annual check-ups, Dr. Hervatic said medical problems could be identified and addressed sooner rather than later.

“Truth be told, most of the times when people bring their animals in, it’s way far down the disease course and then there’s not as much to be done and what will be done will not be as effective,” she said. “Everyone loves their animal without a doubt, but once they are educated and they know they can be proactive they get enthusiastic and they are dedicated. It makes my job easier and everyone benefits. That’s kind of what I see as the ideal scenario for a client-patient relationship.”

“For instance, if we have a vomiting patient, we’ll hospitalize them and give them either IV fluids or appropriate medications,” she said. “If they stabilize, they’ll go home. If they aren’t stabilized, they’ll go to an overnight care facility typically.”

The clinic also offers cat boarding as well as microchippping.

Co-owner Randy Saumers along with his wife Dena have owned the clinic since October 2005, although the clinic has been around since the 1970s.

“When we took over ownership, we continued with the same business model of being an overnight animal hospital for emergencies only, but then we evolved into daytime and nighttime facility, then changed to daytime practice only with one doctor in 2008, trying to keep it a small family-run business with a tight-knit group of people,” Saumers said.

Co-owner Jacques Habra said Westside Pet Clinic set out to make a concerted effort to get to know what the community is looking for in terms of pet care services in order to develop a strong relationship with the local neighborhood.

“The core business is a relationship with the pet owner over the life of the pet,” Habra said. “Preventative care is something people don’t really think about until there’s a problem. We are committed to demonstrating how preventative care actually saves money and prolongs the pet’s life.”