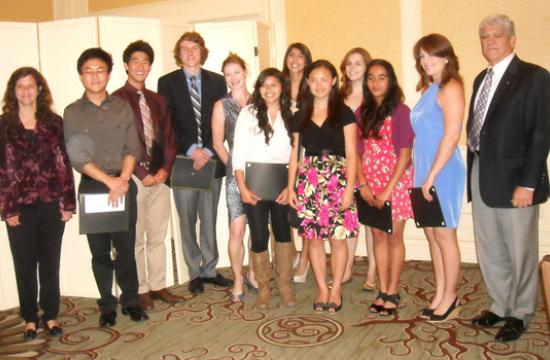 Eleven Santa Monica students received more than $8,500 in scholarships and awards from the Rotary Club of Santa Monica at its monthly luncheon on June 1 at the Fairmont Miramar Hotel in Santa Monica.

A committee appointed by the Rotary Club Board of Directors selected the recipients of the scholarships and awards, which are based upon a combination of academics, community service and school activities.

Students from the following seven schools attended the luncheon, were introduced to Rotary Club members and received their awards:

“Santa Monica is fortunate to have so many academically talented and community minded students in the area who have a shared goal of personal growth and civic responsibility,” said Sharon Perlmutter Gavin, Scholarships/Awards Committee Co-chair at Rotary Club of Santa Monica. “The applicant pool was very competitive. It was a welcome challenge to select such deserving students.”

The Rotary Club of Santa Monica was established on February 1, 1922.

Two vocational scholarships were created at Santa Monica College under president Dick Rice in 1983, which are named in honor of Archie Morrison.

On the Club’s 50th anniversary in 1972, during the presidency of J. Scott King, the Santa Monica Rotary Foundation was created with an initial value of $50,000 to provide capital funds for worthwhile charitable projects in the community.

In 1997, during the Club’s 75thanniversary celebration, club members pledged over $75,000 for the Santa Monica Rotary Foundation.

Currently, the Foundation has in excess of $550,000 in assets, and has donated over $300,000 to local charities and organizations.