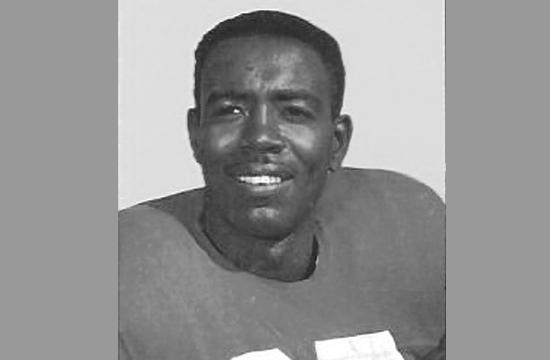 A fourteenth round pick of the San Francisco 49ers in the 1956 NFL Draft, Owens played professional football for three teams between 1957 and 1964. Prior to his professional career, Owens was a basketball and football star at the College of Idaho. As a basketball player, he was the country’s top rebounder. He also played amateur basketball in Seattle, where his then-roommate and future Los Angeles Lakers great Elgin Baylor played college hoops at Seattle University.

In the early 1950s, Owens attended Samohi and competed in both football and basketball.

Professionally, Owens was the 49ers rookie of the year in 1959 with 395 yards and 27 receptions (five of them for touchdowns). His best season was his final one in San Francisco, when he surpassed the 1,000-yard mark in 1961.

During that rookie season with the 49ers, three of Owens’ five touchdown receptions were game-winners. The team, sporting an 8-4 record, made the playoffs for the first time in its franchise history with Owens on the roster. It was that same season where Owens made one of the most memorable catches in 49ers’ history.

In the final seconds of a November game against the Detroit Lions, the 49ers trailed 31-28 and 41 yards away from the end zone. Quarterback Y.A. Tittle heaved a pass toward the end zone, with Owens making a leaping catch despite having a pair of defenders covering him tightly. The play, which won the game for San Francisco, became known as the “alley-oop,” which not only became Owens’ nickname but also was later used to describe a form of a pass in basketball.

Beyond coining a popular phrase in the sports lexicon, Owens was also one of the first football players to ever wear gloves.

After leaving the 49ers in 1961, Owens spent two seasons with the Baltimore Colts before retiring from the NFL as a member of the New York Giants in 1964.

Born Nov. 12, 1934, in Shreveport, La., Owens moved to Santa Monica when he was two. After his playing days, Owens reportedly worked in public relations and with the federal government before joining the 49ers front office in 1979.

Owens is survived by his wife, two children, three stepchildren, and 17 grandchildren.