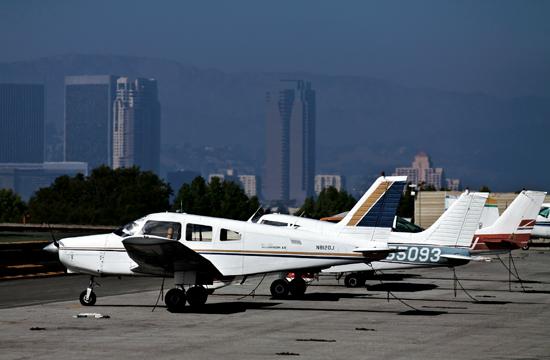 Santa Monica council members for a moment thought they had approved a new program on Tuesday that would have paid flight schools at Santa Monica Airport (SMO) to operate their training programs at other airports. Instead, thanks to the dissenting vote of one council member the policy’s final outcome was tabled to another meeting, ergo allowing SMO’s flight schools to continue operating as is.

Though four of the five members present at the June 26 council meeting voted in favor of creating a pay program to have SMO flight school train at other Southern California airports, a technicality prevented the 4-1 vote from taking effect.

According to city council procedure, any policy that involves an appropriation must have at least five members on the dais vote in its favor. It is essentially a rule that requires support in excess of two-thirds, not a simple majority, of the entire council (not just those present) to be approved.

With two council members – Mayor Richard Bloom and Council member Bobby Shriver – not present at the June 26 meeting, that meant a unanimous vote of 5-0 was necessary in order for the pay to train elsewhere initiative to be formally adopted.

However, Council member Bob Holbrook’s “Nay” vote meant that the initiative had four of the potential seven votes – less than two-thirds of the council – in support.

Accordingly, the agenda item will be tabled until one of the council’s July meetings where at least six members would be present.

The agenda item in question would have, if approved, appropriated $90,000 over a six-month period to be paid to SMO’s flight schools. The money was to be used as a reimbursement “who conduct repetitive takeoff and landing practice” to do so “at other area airports during weekends and federal holidays only.”

As part of the test program, flight schools would have been reimbursed $150 per qualifying flight to cover the costs of flying to anairport other than SMO.

Staff hoped that by creating such a program where flight schools trained at other airports on weekends and federal holidays, residents of Santa Monica, Mar Vista, and Venice would enjoy a reduction in airplane noise and the risk of a crashes into local neighborhoods would be minimized.

“The proposed voluntary flight training reduction incentive test program is designed to reimburse flight schools who conduct repetitive takeoff and landing practice at other area airports that would have normally occurred at Santa Monica Airport,” City staff stated. “This program would reduce the noise impact associated with repetitive aircraft operations during weekends and holidays.”

It was a public policy that four of the council members agreed with: fewer training exercises over Santa Monica neighborhoods during days when more people are likely to be home seemed to be an agreeable – and safe – proposition.

However, Holbrook did not feel he could support the pay to train elsewhere program because he observed opposition among community members.

“To date, not one single person who I’ve received an email from or talked to, including leadership of the different groups around the airport, wants us to do this,” Holbrook said. “The people just don’t want us to do it.”

If it were approved, the test program would have gone into effect on July 1 and continued through December 31.

According to City staff, nearly 40 percent of SMO traffic is local flights.

“Local flights are those operations performed by aircraft that remain in the local traffic pattern or the designated controlled airspace for the airport, generally within five nautical miles of the Airport. Many of these operations are repetitive takeoffs and landings being performed as part of pilot flight training,” staff said.

City staff further added: “Airport staff receives numerous noise complaints from residents regarding these repetitive types of local operations especially during weekends and holidays when most people are at home. The impact of the noise from these operations is more disruptive because it is a constant presence in the area, even though the volume fluctuates.”

The test program, if approved when it is reconsidered, would require SMO flight schools to conduct at least four takeoffs and four landings at another airport in order to be eligible for the $150 reimbursement.

Joe Justice, owner of Justice Aviation, said he came up with the idea for the pilot program.

“All the flight schools at Santa Monica would like to create an environment where there is going to be a little less flak from the neighborhood,” Justice told The Mirror. “There will be those neighbors of course who would complain no matter what was done because they would only be satisfied with the closure of the airport.”

Justice said the flight schools would not make any extra profit from the program.

He said the $150 reimbursement would reduce the cost for the student if they choose to make use of the program and conduct landings and takeoffs at other nearby airports such as Van Nuys, Burbank, and Hawthorne.

“The amount of money for us is pretty much the same because we were going to give the profit to the student as a reduction in their cost,” he said. “It really doesn’t matter to me whether we do the pattern work in Santa Monica or whether we make use of this program and take it somewhere else. It’s not a loss if we don’t get it. It’s something that was honestly thought of to make it better at the airport. Once again, the flight schools feel to some degree that we’ve offered an olive branch to the neighborhood and they took it and slapped us with it.”

The funding level proposed by City staff would encourage a maximum of 600 training flights to use other area airports. This represents a potential reduction of up to 4,800 takeoffs and landings on weekends and holidays during the six-month test period, staff added.