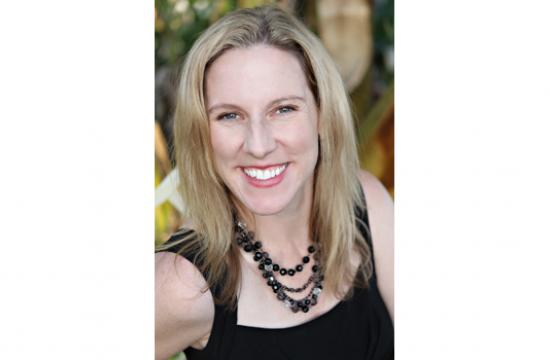 With her bubbly personality, Kiersten Elliott is not only Santa Monica College’s biggest booster, she cheers on students, staff and colleagues with praise, encouragement and awards that she has initiated.

But don’t be completely fooled. Underneath that exterior of infectious energy and caring enthusiasm is a hard-working, savvy, innovative and even demanding manager who has made an indelible mark on SMC.

It’s for these reasons that Elliott, dean of enrollment services, has been named 2012 SMC Manager of the Year. SMC President Dr. Chui L. Tsang will present the award to her at the college’s annual Recognition event June 13.

“But,” she adds with a smile, “she’s also a tough cookie. She’s constantly coming up with innovative ideas that are great for our office, but I can’t keep up with her.”

Elliott, 39, of Brentwood, came to SMC seven years ago with her trademark energy, cheerfulness and drive that date back to her Glendale childhood.

The daughter of a television writer on such series as the “Donny and Marie Show” and “Dolly Parton Show,” she started out at a young age following in her father’s show biz footsteps by acting in several local theater productions and a commercial. She continued to do this through elementary and junior high school until, she says, “I didn’t want to be different any more, I wanted to get braces just like everyone else.”

In junior high and high school she served as class president every year except 10th grade, when she was a cheerleader, while maintaining an almost perfect 3.86 grade point average.

At the University of California, Santa Cruz she was a beehive of activity, serving as residence hall assistant, counseling students, organizing events, serving on student government, and more. She did more of the same in graduate school at Penn State and later, working in residential life at Northwestern University, both places where she also won many awards for her academic achievement and student and volunteer activities.

That pattern has continued at SMC as Elliott has brought about changes in the Admissions Office, served as Management Association president for three years, is one of the chief architects and organizers of the wildly successful VIP Welcome Day for new students, and orchestrates commencement exercises that draw 2,000 students, family members and friends every year.

“Truly, Kiersten embodies the attributes of what a manager should be,” says Dean of Counseling Brenda Benson. “She leads by example, she communicates her vision, she genuinely cares about what she does and who she does it with, she’s quick to recognize the accomplishments of others, she keeps her ego out of things, she’s forward thinking, and she never forgets the people side of things.”

When Elliott was hired at SMC as assistant dean of enrollment services (she was later promoted to associate dean and then dean), it marked a shift in her career. With an undergraduate degree in psychology and a master’s of education degree in counseling, and then working for 14 years in college residential life, she had kept her focus exclusively on people.

While enrollment services is essentially a customer service operation, it also is governed by pages and pages of sometimes complex state and federal laws and regulations. But Elliott jumped into the new line of work – paperwork and all – though she never forgot that her job was ultimately about people.

“At the beginning I learned from the ground up,” she said. “I served as a registration clerk and in various other positions. I realized we could be more proactive and take a student-friendly approach.”

That’s when she started to make her mark, coming up with creative ideas, meeting regularly with her staff of 20, asking them how she could help them. Over time, a shift occurred in the office.

“I feel like I’ve been able to make my registrar role more like student life,” she said. “I’ve helped my staff to be more student-friendly. I don’t want the Admissions office to be the bad guys, and I don’t think we’re viewed that way any more.”

Elliott is as busy outside SMC as she is when she is at work. Married in 2001 to her high school sweetheart Tony Spencer, she is the mother of an active 5-year-old, Kinkade, and is pregnant with her daughter, due in September. Although she will take some time for maternity leave, she will return to the college she loves.

“What makes SMC so special is its creative and talented staff and its innovative initiatives,” Elliott said. “I really feel like we’re different. Our VIP Welcome Day is like a four-year university. We go above and beyond to serve our students and that’s something we can be proud of.”