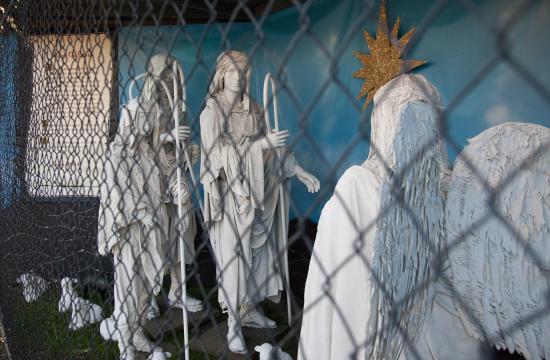 Santa Monica City Council is scheduled to vote next Tuesday, June 12 to decide the fate of the long-standing tradition.

City Attorney Marsha Moutrie has recommended the council ban all displays, including the Nativity Scenes and the traditional Hanukkah menorah, from Palisades Park.

Nativity Scenes backers have countered that city needs to recognize the constitutional right to free speech in the park and assure restoration of the full 14-booth display in December, which was cut to three booths last year.

The June 12 meeting is scheduled for 6:30 p.m. at City Hall, and the Nativity Scenes matter will be first on the docket. Attendees can sign up before 6:30 p.m. to speak for a maximum of two minutes each.

The petition was circulated in paper form and online and remains available at the Nativity Scenes website at www.SantaMonicaNativityScenes.org.

“This display has been an inspiration and a positive image for Santa Monica for generations,” wrote Ann Piehl of Santa Monica. “Please do not let it be destroyed.”

“There are few things in our community more special,” said Santa Monica resident Janel Dreeka, for whom the display of the birth of the Christ child has a new resonance. “I’ve been enjoying this sweet piece of Christmas since I was six years old, and now at 42, I hope to share (it) with my newborn boy someday.”

Also testifying to the cross-generational appeal of the Scenes was Cathy Conners of the Palisades.

“My parents drove us by the Nativity Scenes every year when I was a small child. I am 52 years old. I have been doing the same with my three sons every year since they were born, after attending Christmas Mass at St. Monica Catholic Church. They have never tired of this tradition. They are now 14, 17 and 20. They have always planned to carry on this tradition with their families some day.”

Not only Christians enjoy the Nativity Scenes, signers said.

Philip Cass of Santa Monica wrote, “I am not a Christian, but have always enjoyed the Nativity Scenes, and viewing them on Christmas Eve has been a part of my family’s Christmas tradition for over 20 years. We were so disappointed this year (when the display was cut to three booths). I don’t see who they are hurting.”

A member of the local Hare Krishna community commented that all religions ought to be celebrated and cherished and that she loved the Nativity Scenes.

Some comments showed that the Scenes remain a visitor attraction.

Scott Jensen of Minneapolis wrote, “I flew in to Santa Monica with my family just to see the sights and the Nativity Scenes. My children and I were very disappointed when we found out a longtime tradition had been ruined by a small vocal minority of troublemakers. I guess I will go somewhere else next time.”

Numerous signers saw curtailment of the Scenes an attack on religious freedom.

“Even atheists or people of any religion can appreciate the history involved in this — the art and the dedication and devotion of those who made it,” commented Sara Bock of Los Angeles, who grew up in Santa Monica. “It’s called respecting other traditions even if you don’t believe in it yourself. This is America – please don’t take away freedom of speech and worship.”

“What an absolute disgrace to shave slowly away at tradition and the importance of the meaning of Christmas,” declared Kimberly Wolfe of Santa Monica. “What is next? We will be known simply as the city of Monica because ‘Santa’ implies Saint?”

Former Santa Monica resident Barbara Crandall said of the truncated display last Christmas, “Santa Monica’s elected officials have chosen to ignore the ‘votes’ and the majority of the people’s wishes. This is un-American, and these officials should be unseated for refusing to follow the wishes/direction of the very people that elected them. . . . Please, city officials, step up, and do the right thing for all the people you were elected to represent.”