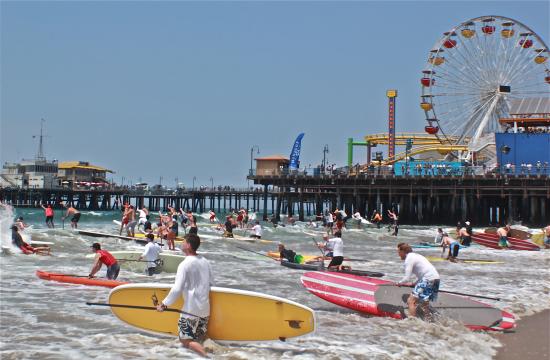 The Third Annual Santa Monica Paddle Races was held Saturday with elite class paddlers racing on a 5.5-mile course, which was won overall by prone paddler Anthony Vela of San Clemente with a time of 1:00:23.

Kyle Power of Agoura was only 23 seconds behind at 1:00:46. Candace Appleby was once again the fastest woman, winning the women’s category with a time of 1:14:12.

Thousands of spectators gathered to watch some of the best watermen and waterwomen in the world compete at the 2012 Santa Monica Pier Paddle Race and Ocean Festival, which was sponsored by Honolua Surf Company and Pacifico Beer.

Spectators lined the railing of the pier throughout the day as racers navigated higher-than-normal surf at the start and finish lines.

Visitors to the festival were also treated to live music, hula dancing, and dozens of vendors and historic exhibitors.

Complete finish-line results will be posted at www.pierpaddle.com.

“Our company is all about supporting the traditions of these sports and of the waterman lifestyle,” said Pat Fraley, brand manager of Honolua Surf Co. “We’ve been involved in this event since the very beginning and we’re glad to see the Pier Paddle has grown every year.”

Paddlers in this year’s race ranged in age from nine years old to people into their seventies. Also present were a number of families with multiple generations who raced together. The Pier Paddle also showcased lifeguard dory races.

A number of legendary figures from surfing and paddleboarding’s past were present.

Also on-site sharing stories her stories of paddling’s early days in Santa Monica was Esther Maire Lorenz, who won the US National Paddleboarding Championships at the pier back in 1947.

“I think this is wonderful to see paddling coming back like this,” said Lorenz. “I just think there should be even more races.”

While paddleboarding is exploding in popularity today, it had a long prior history, including a heyday in the 1940s when the Santa Monica Pier was a hub for racing.

The sport disappeared for decades, eclipsed by surfing, only to be brought back to life with the innovation of stand up paddling, or SUP.

The Pier Paddle was a benefit for Santa Monica-based Heal the Bay and its public marine education facility, the Santa Monica Pier Aquarium. Heal the Bay will receive a portion of net proceeds from the event.