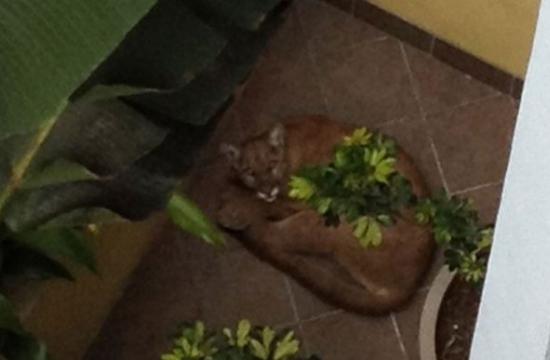 The Santa Monica Police Department hosted a focus group meeting on Monday in response to the May 22 shooting of a wild mountain lion.

The mountain lion was discovered in the courtyard of 1227 2nd Street in Downtown Santa Monica. The focus group, which met at the Ken Edwards Center, consisted of representatives from the City of Santa Monica, the California Department of Fish and Game, the National Park Service, California State University Channel Islands, the Society for the Prevention of Cruelty to Animals Los Angeles (SPCA-LA), In Defense of Animals, Animal Advocates, Fund for Animals Wildlife Center, and local veterinarians.

Based upon the group discussion, to address future such circumstances, the Santa Monica Police Department has committed to:

“Although these efforts lasted for more than three hours, they were ultimately unsuccessful,” Lewis said. “The mountain lion was killed to prevent it from escaping from the courtyard and endangering the public.”

The group’s participants shared insights on the mountain lion population which inhabits the Santa Monica Mountains, their migratory habits and general behavioral patterns.

Methods of wild animal capture were also discussed including the inherent risks and the reasonableness of those methods when applicable in real-life scenarios.

Public safety, legal considerations, and the need for pre-established agreements to enhance public and private sector partnerships were also discussed.

Lewis said the group’s participants readily acknowledged that although public safety must be the primary consideration under such circumstances, the safe capture of wildlife is a valued response which is subject to a complex series of variables.

“Accordingly, it was agreed that when wild animals are encountered in urban settings, a successful animal capture may be elusive,” Lewis said.

Additional information regarding the focus group presentation may be viewed on the Santa Monica Police Department website at www.santamonicapd.org/.