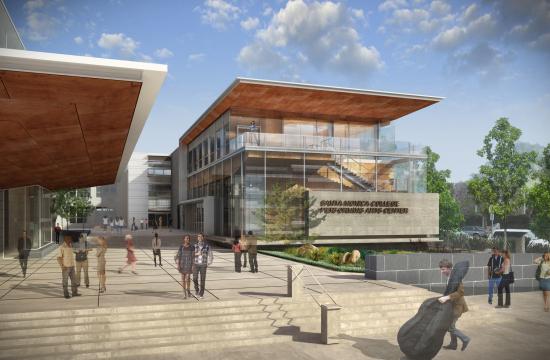 The Santa Monica College Performing Arts Campus East Wing project has won its second design award — this one from the Westside Urban Forum.

The facility won a citation award in the public/institutional category for In-Process/Unbuilt projects at the forum’s 2012 Design Awards held recently in Santa Monica.

The project was cited for being “very well detailed with a specific language” and for being “a nice counterpoint to the existing performing arts center.”

Designed by the Los Angeles office of the architecture firm DLR Group WWCOT, the project had previously been honored by the Southern California Development Forum for design excellence in the “Un-built Concepts” category.

Featuring state-of-the-art performance and rehearsal studios, the 12,000-square-foot facility will include a rehearsal and performance multi-purpose hall, instrument and equipment storage rooms, offices, music classrooms and more, adjacent to The Broad Stage and Edye Second Space.

Construction of the $12.5 million project is scheduled to begin in November 2012 and be completed in December 2013. The East Wing facility is funded by Measure AA, a bond that was passed by Santa Monica and Malibu voters in 2008.

It will replace the existing East Wing that was damaged in the 1933 Long Beach earthquake and never properly upgraded.

This award is the latest in a string of honors that SMC facilities have garnered over the past few years. Other design awards have gone to The Broad Stage, the Quad, Theatre Arts Building, Library Expansion, Science Complex, and new Student Services Building, which is currently under construction.