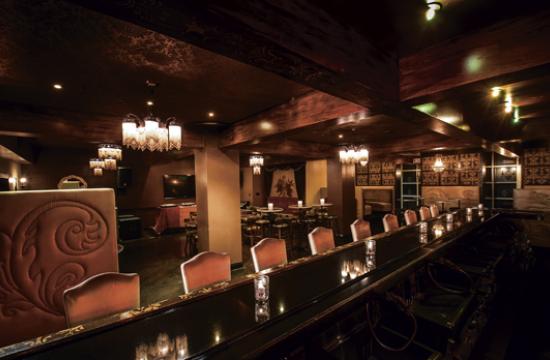 You’re not going to get what you expect at The Charleston – but in such a good way that when you leave, you’ll be feverishly texting all of your friends about “this cool new place on the Westside.”

Recently I sat down with chef Jet Tila and, as we relaxed to the heartwarming live RandB and disappeared behind cocktail rims, he talked about his menu, dreams, and what he had for breakfast.

“We want you to leave saying “WTF?” so you’ll go Facebook us, tweet it, yelp it, and everything else you do to spread the word,” he explained, as I pointed out the surprising juxtaposition of live music, pork belly buns, old school chandeliers, and a drink named the Victoria’s Secret.

Unlike most bars, Chef Tila doesn’t want his patrons to have to order pizza, smuggle chips, or wait for a food truck in order to satisfy their hunger.

Since this is Santa Monica, his menu spans enough genres, themes, tastes, and trends for anyone who wants a snack or a full plate to piece together a meal of utter fancy.

During the flashback of 1990’s RandB, we tucked into the Short-Rib Tacos and Machengo Stuffed Piquillo Peppers for starters, followed by the Bacon, Egg and Cheese Flatbread, Shepherd’s Pie, and Smoked Macaroni and Cheese for mains, all topped off with the Chocolate Bread Pudding (a la mode) for dessert.

As we bonded over our mutual love for everything pig, I hogged (pun intended) the Pork Belly Bao (succulent five-spice braised pork belly, tender bao buns, pickle, and hoisin), and totally swooned over the Bacon-Wrapped Dates (marcona almond-stuffed).

The Bread Pudding was so good I’m pretty sure I blacked out through that portion of the conversation (I blame the brioche and crème anglaise) and just as I forgot I was in a bar.

We got reminded with several signature drinks from the beverage menu.

With the Minted Mule, Jet 75, Victoria’s Secret, and the cucumber cooler, we were set, and began to see the transformation of The Charleston from a supper club to a sexy Santa Monica bar. And then everything went silent – well – almost: Chef Tila was telling me that he had a protein bar for breakfast when his operations manager and resident mixologist Mike delivered a drink that had a stick of candied bacon curved coyly against a cinnamon-prosciutto dusted rim.

Sallie? Sallie? It took several seconds and a few calls of my name before I was able to pull out of my delighted delirium and fittingly that’s what I think it should be named, and have lobbied ever since. So if you like to drink and love bacon then ask Mike for the candied-bacon Sallie. It’s fantastic, and sums up The Charleston exactly: surprising, delicious, and memorable.

But it gets better. While The Charleston is open at 5 p.m. during the week, on the weekend it opens its doors several hours earlier for Jazz Brunch from 10 a.m to 2 p.m.

A firm believer that there is always a need for more bruncheries in Santa Monica, here is the newest and coolest: live jazz, endless mimosas, and bombastic fare like Brisket Hash (Chef Tila recommends his fried Chicken and Waffle), I’ve officially added this to my GPS favorites.

And so should you – for any and every occasion.

That Means: You’ll eat well and drink a lot as you relax back and listen to house-vetted music.

And Will Remind You Of: A Kogi truck in Vegas with a splash of what we love from the 1930’s (but tastier, closer, and current).