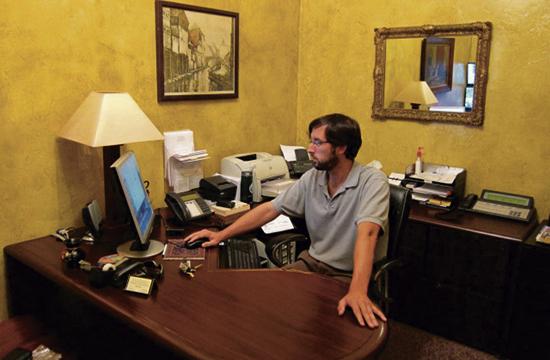 From life as a feared Boston gangster who appeared on the FBI Most Wanted list to a quiet Santa Monica resident who took daily walks on the beach, many “close” to Whitey found it hard to believe their blue-eyed neighbor was a killer of 19 people.

Gideon Brower, a KCRW co-producer of the on-air piece, spent a good part of the last year working on the story.

He said he formally interviewed seven of the couple’s neighbors in the Princess Eugenia and The Embassy Hotel Apartments (1012 and 1001 Third Street respectively), and talked to others for background.

He said he had known some of them for many years as the two buildings have had the same owners and staff.

“I was interested to discover how much people liked Carol and Charlie Gasko, as they were known here,” Brower said. “Catherine Greig especially was seen as warm, helpful and kind, and there were many stories of her doing little favors for people and feeding the neighborhood stray cat. Bulger was less forthcoming, but he was also generally thought of as a nice guy and good neighbor.”

Residents said Bulger liked to dispense small gifts; he gave things like candles and shoelaces and flashlights to several neighbors, and people said he could be charming and even funny.

“When you contrast the image of him here in Santa Monica with the crimes he’s now charged with in Massachusetts, it’s pretty surreal,” Brower said. “I don’t know that all the neighbors can fully believe that Whitey and Charlie could have been the same person, although the fact that he had all those knives, pistols, revolvers, shotguns and rifles hidden in his apartment suggests he hadn’t undergone a miraculous transformation.”

Brower said the people he interviewed didn’t mind talking to him, but not everyone he approached wanted to discuss the couple.

“Either they felt protective of ‘Carol and Charlie,’ they preferred to stay private, or they didn’t want to attract further media attention,” he said. “Beyond that, some neighbors feel it’s not safe to go on the record even though generally people’s impressions of the Gaskos were very positive.”

When asked if any of the residents had any suspicion of whom Bulger really was, Bower said none of them did.

“Catherine, especially, had a way of deflecting questions about herself by asking the neighbors about their own lives,” Brower said. “And she gave excuses for some of their odd behavior – that Charlie was developing Alzheimer’s for instance – that people found believable. The fact that we don’t necessarily want to know a great deal about our neighbors was something they took advantage of as well.”

Brower co-produced this story with Eric Drachman, which was the first radio piece for both of them.

The piece aired earlier this week on Tuesday, but it can be listened to at http://www.kcrw.com/etc/programs/uf/uf120622the_couple_in_303.