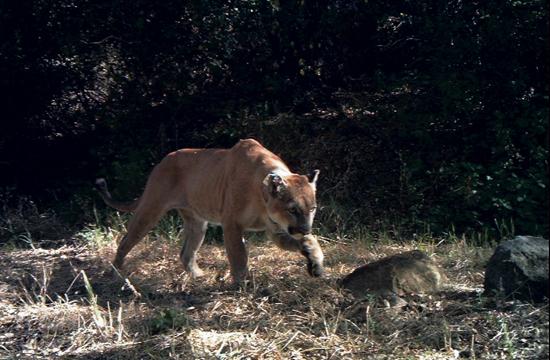 A young mountain lion was shot and killed in Santa Monica on May 22, 2012. It was hard to believe he was on 2nd Street. What happened to bring him here? Did the authorities do what they had to do to protect public safety or could the mountain lion have been saved and safely relocated?

The Santa Monica Police Department, the California Department of Fish and Game, and the National Park Service, among others, will be meeting on Monday, June 25 as part of an official investigation into the tragedy and to develop a protocol on the chance that this could happen again.

Seth Riley, Wildlife Ecologist, and Jeff Sikich, Biologist, are with the National Park Service and track and monitor mountain lion populations in the Santa Monica Mountains.

“We don’t know exactly how many mountain lions live adjacent to our urban area,” Riley said. “Currently five are radio collared and we are following them. Two are in the Santa Monica Mountains; two are in the Santa Susana Mountains. And one, known as P-22, is in Griffith Park. We expect he will stay there, without causing any problems, and will not leave until he goes looking for a female mountain lion.”

The original range of the mountain lions, also called pumas, cougars, and in Florida, panthers, was from South America to Canada and from coast to coast in the United States.

Except for the Florida panthers, who were declining due to a lack of genetic diversity but are coming back due to conservation actions, these animals no longer exist east of the Rockies. They were eliminated in years past by hunters, ranchers, and farmers. A law banning hunting of mountain lions was not passed in California until 1990.

“Because mountain lions need so much space they are among the first animals to be affected by urbanization and habitat fragmentation,” Riley said.

The area of the Santa Monica Mountains totals approximately 650 square kilometers and could support a population of up to six to eight mountain lions. Not enough to be genetically or demographically viable.

“Davis has one of the best programs in ecology anywhere and especially in the United States where urban ecology is a relatively young field,” Riley said.

Of the 22 mountain lions identified over the past decade they are still tracking five. Some died of natural causes. One of the mountain lions was on the 405 Freeway and was hit by a car and one, known as P-9, was hit by a car in Malibu Canyon. But the most common source of mortality comes from fights between male lions over scarce territory.

The original mountain lion in the study, P-1, was tagged in 2002. They lost contact with him in 2009 when his collar came off in a fight. The scientists went to the site where the collar came off and typed the blood they found, which enabled them to establish P-1’s identity. They know he survived as they found his scat later in 2009.

The natural pathways that connected the animals to the Simi Valley, to the Santa Susana Mountains, and even to Los Padres National Forest, which goes all the way to Big Sur, were no longer available for the mountain lions.

With young males, who start to become independent at about one-and-a-half trying to find their own territory and with more adult males competing for the same range, existence became more difficult for the mountain lions.

As part of the study the mountain lions are tranquilized and given radio collars. Riley and Sikich bait a cage with deer meat, the preferred diet of the mountain lion. When the mountain lion is inside the cage they can get right up next to the animal and use a blowgun to shoot a tranquilizing dart. The dart can also be administered from a distance using a special rifle.

The mountain lions are anesthetized with ketamine, which causes disassociation, and medetomidine, which is an analgesic. They use a blowpipe – a long tube with a dart containing the medications. Dosage is administered in direct proportion to weight. Generally four or five minutes elapse from when the dart is administered to the mountain lion being tranquilized. It could take longer in a different environment. Once tranquilized, the mountain lions are out for 45 to 60 minutes and then the effects wear off completely.

“None of the animals we have radio tracked has ever behaved aggressively toward people,” Riley said. “The Griffith Park mountain lion is in a natural area doing his natural thing and being monitored. If we saw a change in his behavior our response would change.”

“Clearly the mountain lions don’t consider people to be prey,” he said. “They are right next to us and yet they are elusive and run away.”

However, there have been serious and deadly attacks, including one in 2004 in Orange County where a mountain biker was killed.

Riley said to be aware that mountain lions are around, although it is incredibly unusual to encounter one.

“They know we’re here and they are elusive and keep away from us,” he said. “If you do encounter one, stand tall, make yourself look as big as possible, make a lot of loud noise, don’t turn and run, back away slowly and deliberately. Don’t act like a deer! Don’t run as if you were the prey. Remember, they want to get away from you.”

The National Park Service was created on August 25, 1916 by President Woodrow Wilson to “promote and regulate the use of Federal areas known as national parks, monuments, and reservations . . . by such means and measures as conform to the fundamental purpose of the said parks, monuments and reservations, which purpose is to conserve the scenery and the natural and historic objects and the wild life therein and to provide for the enjoyment of the same in such manner and by such means as will leave them unimpaired for the enjoyment of future generations.”