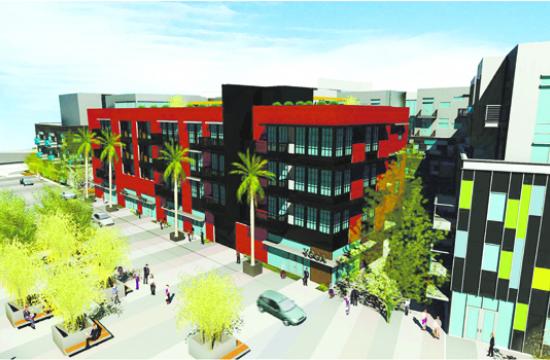 The Village Trailer Park’s mixed-use redevelopment will head to Santa Monica City Council on July 24 after the Planning Commission recommended the Development Agreement (DA) move forward on Wednesday night, but with a raft of amendments to the project’s tenant relocation plan, design elements, and community benefits.

Planning Commissioners deliberated for about four hours before passing a motion just after midnight to send the “East Village” project to Council next month.

Commissioner Richard McKinnon raised concerns at the start of deliberations about the absence of the Bergamot Specific Plan, which is not expected to be approved for at least another six months – maybe longer.

“We are unguided unlike any other area of the city of how this area will develop,” McKinnon said. “At the moment, what we do know is that LUCE (Land Use and Circulation Element) has specified that there will be development in only four percent of the City and one of the areas where there will be development or applications for building will be considered that are slightly different will be in that general area.”

McKinnon strongly suggested a motion that City Council defer consideration of the DA until the Bergamot Specific Plan was in place.

“At least we draw to the City Council’s attention that without a Bergamot Plan as a whole, nailed down, you are making the plane as you are flying in it and there are consequences to that and you have to live with it,” McKinnon said.

McKinnon’s motion failed with only Commissioners Jennifer Kennedy and Ted Winterer joining him in voting for the motion. Commissioners Jim Ries and Amy N. Anderson voted against it. Commissioners Gerda Newbold and Jason Parry had left the meeting at about 11:30 p.m. – about 30 minutes before the vote was taken.

Immediately after McKinnon’s failed motion to have the DA deferred, a new motion was unanimously passed by the five present Commissioners that the DA move forward, but with amendments to the project’s tenant relocation plan, design elements, and community benefits.

Since the project means Village Trailer Park must close, 48 full-time households and eight part-time/seasonal households will have to be relocated.

Commissioners agreed to the following amendments in the Tenant Relocation Plan:

– All relocation options to include the option of case management services for seniors, disabled residents, and families with children. It is recommended a case manager be assigned to connect the tenants to service partners once they have relocated.

– In option three, Commissioners recommended that the developer increase subsidized rent payments for temporary relocation from $1180/month to $1652/month. Tenants would also be given 45 days instead of 30 days to accept or reject an offer to return to “East Village” once it is complete.

– In option four, Commissioners recommended that residents who relocate to Mountain View Trailer Park be given ownership options.

– A greater mix of one, two, and three bedroom units be incorporated (the majority of the units are studios).

– An increase in open green space, either onsite or offsite.

– Increase the width of the shared New Road to be 30 feet.

– Require that planters go in ground, opposed to above the ground.

Other general recommendations for the DA included:

– As the DA goes forward, that the Planning Commission is notified of any changes.

– Ensure Exhibit G3 in the staff report is legible and correct. The exhibit relates to open space and is in black and white, which Commissioners said was not legible enough to define how the different spaces are defined.

– The alternative plan submitted to the Planning Commission on May 23 by opponents of the development is formally submitted to City Council for review.

Commissioners recommended the following community benefits be added to the DA:

– The Tenant Relocation Plan recommendations be the highest priority.

— The developer to make funds available to an agency that provides services to seniors and the disabled.

— The project to incorporate photovoltaics.

— If a smaller version of the project were approved, then less community benefits would be needed.

Luzzatto told The Mirror on Thursday he was pleased the Planning Commission had given the project so much time and attention.

“We want as much as they do to deliver a great project for the community,” Luzzatto told The Mirror. “We’re going to study very carefully the recommendations they made to see what we can do to improve the project prior to City Council.”

There was no public comment at Wednesday’s meeting as more than eight hours of public testimony, questions, and staff reports was logged at hearings on May 23 and May 30.