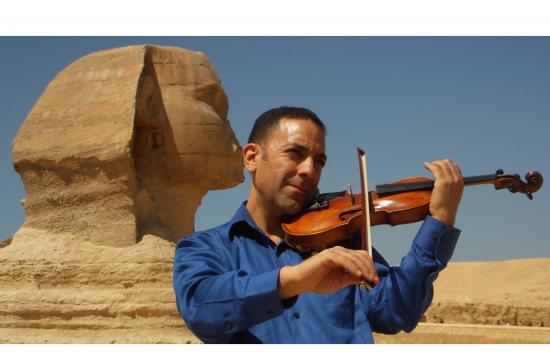 Adbel-Gawad said he first heard about the Third Street Promenade in the 1980’s when he attended USC.

Friends suggested to him that it would be a good place to meet people, play his music, sell CD’s and supplement his income.

“I used to do that in Paris, Brussels, Liege and Cologne. I lived for a couple of years as a street musician which you can do in Europe by the way,” Adbel-Gawad said.

In Brussels, Abdel-Gawad said he played on the equivalent of the Third Street Promenade, in the center of Brussels next to a cathedral-like hall which everybody knew.

He used to compete with gypsy musicians — a mix of children and adults.

They were filmed in a documentary on the gypsies, titled “Lachadrome”. The documentary included gypsies from all parts of the world — the Roma, Egyptian gypsies, and Spanish gypsies.

In Liege, Belgium, Abdel-Gawad played with the New Music Ensemble — a string ensemble with cello, violin, viola, bass, and more than 20 musicians.

“I shook the place up as I came between contemporary style and Arab music,” he said. “I had them use string instruments like percussion, they tapped on their instruments, techniques that I intended for the violin.”

Abdel-Gawad was born in 1965 in Cairo, growing up on the East and West coasts of the U.S. A graduate of USC with a Ph.D. from Harvard in music composition he lives in Southern California.

In order to enrich his musical training and broaden the appeal of his music Abdel-Gawad apprenticed with a master of Egyptian traditional music, a celebrated violinist who accompanied the legendary Egyptian singer Oum Kalsoum, the “Incomparable Voice” so-named by opera diva Maria Callas.

From 1993 to 2002 Abdel-Gawad was based in Brussels, Cairo and Stuttgart. In Paris he performed as a street musician and was commissioned by and performed with the New Music Ensemble of Liege.

He gave concerts and workshops in Germany, Italy, the Netherlands, Denmark, Spain, and Switzerland as well as co-founding a traditional Egyptian Music School in Cairo funded by the Dutch Embassy.

With funding from European arts organizations Abdel-Gawad traveled to the Congo and the equatorial rain forest in Cameroon to record music and collaborate with musicians from Burkina Faso, the Congo, Cameroon, Guinea, Ghana, Morocco, and Egypt.

song. This school is the only such teacher-disciple music school to develop in recent (c.100 years) documented Cairo history. Abdel-Gawad is considered by his Egyptian peers to be one of the main protagonists and one of the most serious artists to come out of this particularly distinct stylistic school.

His latest album “Egypt: Mother of the World” was released at the 2010 Chicago World Music Festival.

Abdel-Gawad’s second album, funded in part by the Sparkplug Foundation in New York City, is a full length album of his original compositions.

Abdel-Gawad recently played on Guarneri and Stradivarius violins at Qatar for a concert at the Qatar Islamic Museum in collaboration with the European curator of the Stradivari Society.

In Santa Monica, Abdel-Gawad teaches Arab music to students from 17 to 52. He will lead an Arabic-Egyptian Music workshop for teenage musicians introducing the rich musical and cultural heritage of the Arab world through the building blocks of Arabic-Egyptian music.

In this daylong workshop, participants will learn to play a musical work from the Arabic-Egyptian tradition, using an approach that includes both learning by ear and reading a notated score; participate in activities that introduce and illuminate the signature elements of Arabic music including the maqam,which designates both the melodic mode and the musical mood or quality and the sikah, the characteristic use of quarter tones.

He also recently performed to a sold-out house at the Willits Theatre which is located at the gateway to the Redwood Forest in northern California. While there he gave an Arabic percussion workshop at the Willits Community theatre.While in Northern California he performed for 700 people at the B’nai Israel Congregation in Sacramento for an interfaith event entitled: “Shalom, Sallam, Peace—Standing on Common Ground.

He was also a featured artist with the Yuval Ron Ensemble performing for another hugely attended interfaith event in Beverly Hills last April.

For those interested in private instruction in Santa Monica, Los Angeles, and Ventura counties, he can be contacted at music@musicriad.com.