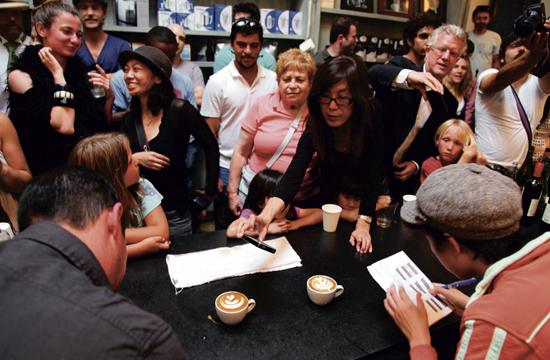 Nearly 100 people gathered at Caffe Luxxe on Montana Avenue for a night of fun, competition and community at the cafe’s Latte Art Throwdown on June 19.

The throwdown pitted barista against barista in three rounds of competition for the title of Best Latte Artist 2012.

Latte art is made by pouring steamed milk into a cup of espresso in a way that forms a pattern on the surface of the drink. It takes experience and a steady, deft hand to craft a pleasing design out of the two liquids in the cup. The drinkable design is the barista’s signature and adds a pretty finish to your latte or cappuccino.

The rosetta leaf, tulip, and heart are traditional latte art designs. Making a rosetta is “all about momentum, the speed with which you create the petal in your pattern. The tulip is all about starting and stopping in a very controlled way, which is what I’m best at,” barista Alex Culliton told The Mirror. Latte art can get quite intricate and original, depending on the barista’s skill and creativity.

The throwdown gives the cafe’s baristi a chance to shine with a skill they’ve honed over years during their daily shifts. But the heat of battle combined with the pride they feel in their art is enough to undermine the steadiest of hands, making for fierce competition.

“It takes an unbelievable amount of work and practice, and everyone’s been talking smack and practicing for months beforehand, trying to get their freestyles down just in case they make it to the final round,” said 2011 latte art champion Casey Corn.

The art was judged on its symmetry, shape, contrast, number of petals, grace and creativity. LA Weekly writer Tien Nguyen, who has judged many a throwdown in Los Angeles, was on hand as a guest judge.

On the spectator side of the counter, the mood was chaotic and festive. The general mayhem, the piercing sounds of hissing steam, and the frequent banging of the tamper made it hard to know exactly what was going on sometimes, but that didn’t seem to matter to the crowd, which was well-stoked by a spread of wine, beer, and nibbles.

The onlookers were mostly regular Caffe Luxxe customers who came to cheer on their favorite barista. They crowded around the stainless steel counter; some stood on chairs to get a better look. As each barista completed their design and placed it on the counter before the judges, the crowd whooped and hollered, snapping pictures of the foamy creations with their cell phones and cameras. A snapshot of each design was projected on the wall for all to see, and a blow-by-blow account of the event was live-tweeted by local comedian Joseph Bolter.

In the end, Joaquin Levitt took third place, Alex Culliton took second place, and Alexis Bolter was crowned 2012 champion. Each of the three winners collected a trophy, a gift certificate, and bragging rights until next year’s throwdown.

Guest judge Nguyen told The Mirror she was impressed by the large customer turnout and by the level of art displayed at the throwdown; Bolter’s art was among the best she has ever seen.

For all the artistry of the latte designs, it’s somewhat of a footnote to the two things Caffe Luxxe does best: make darned good coffee, and build community in the independent coffee house tradition.

“This is my art that I have chosen in my 5 years of coffee work,” said Culliton, who holds an art history degree from the University of Massachusetts. “But it’s not just the latte art. It’s the daily interaction with the customers that really makes me keep wanting to come back to work, seeing the same people every day, being present for them and making them a beautiful, delicious cup of coffee.”

“Almost everyone here tonight is from the neighborhood,” said Caffe Luxxe co-owner Gary Chau, who takes pride in hosting social events that showcase the talents of the baristi or customers.

This summer, local high school and college students will play jazz on alternating Sundays at Caffe Luxxe’s 26th Street branch. And free coffee will be served from noon to 2 p.m. this Friday, June 29, to celebrate Caffe Luxxe’s sixth birthday.