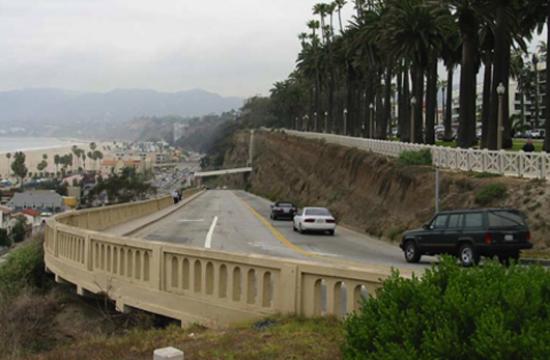 If the arrival of the Expo Line would make it easier to get in and out of Santa Monica by 2016, the shutting down of the California Incline in 2013 will notably make it harder to enter and exit this coastal municipality.

Thanks to a seismic upgrade project unanimously approved July 10 by the City Council, both Santa Monica and the California Dept. of Transportation (Caltrans) will tear down and rebuild the California Incline, a bridge connecting Pacific Coast Highway at nearly sea level to the intersection of Ocean and California Avenues atop the Palisades bluffs dozens of feet higher.

Once complete, the new structure will be “built to current seismic standards, will correct deficiencies in the bridge and make it safe for vehicular, bicycle, and pedestrian use,” City Hall stated.

“Its condition is poor and deteriorating beyond the capabilities of what routine maintenance can repair,” City staff said.

City Hall also stated that the construction project “qualifies for replacement under the Highway Bridge Program (HPB) and therefore 88.5 (percent) of the cost to rebuild can be paid for with federal rather than local funds.”

Construction is expected to begin in fall 2013 and continue for as least 12 months, but perhaps as long as 18 months.

According to staff, the project would cost more than $2.5 million to complete.

Though some suggested expedited construction to take place 24 hours per day, seven days per week, City staff also received competing concerns that late night construction would be too loud.

The municipal code limits the time when construction projects can take place within city limits. Specifically, work can only be done from 8 a.m. to 6 p.m., Monday through Friday, and 9 a.m. to 5 p.m. on Saturday.

“Balancing the goal of expediting the project with minimizing impacts to nearby residents, particularly during sleeping hours, staff proposes pursuing an after-hours work permit so that work can take place between 7 a.m. and 10 p.m., Monday through Friday, and 7 a.m.–9 p.m. on Saturday,” City staff said.

“This would allow two construction work shifts per day, six days per week (and) would expedite construction by roughly 25 percent above the option of working during standard City construction hours only and eliminate construction noise between 10 p.m. and 7 a.m.,” the staff report continued.

During the construction period, alternate routes will exist. Most traffic would be rerouted onto Moomat Ahiko Way and nearby freeway onramps along the Santa Monica Freeway.

Detours will frequently be advertised via “changeable message boards” and traffic officers will be assigned to the area on an as-needed basis.

Real time traffic cameras and monitors will also be used to keep track of traffic along the PCH and to inform drivers of real-time driving conditions and travel times.

Signal timing may be adjusted based upon traffic volume, thanks to traffic-monitoring cameras to be installed in Santa Monica Canyon.

About 1,400 feet in length, with a little more than half of it serving as a bridge, the California Incline is a graded road that serves as a key road connecting Santa Monica to local state beach and points due northwest, such as Malibu, Pacific Palisades, the Santa Monica Mountains, Topanga, and Ventura County.