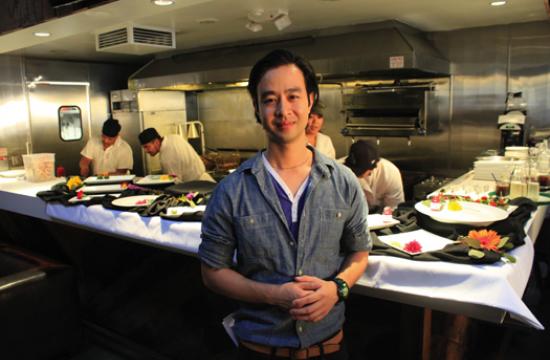 The one-year anniversary tasting bash on July 14 featured a variety of exotic brews from Germany, the Americas, and Belgium as well as a sampling of sausages, burgers, and Bavarian pretzels.

Over the last year, the owners of BRÜ HAUS have turned its location into a delectable brew and brats restaurant and see-and-be-seen late-night event location.

The menu has expanded over the year outside of sausages to include pulled-pork sandwiches, beet salad, and the award winning BRÜ Burger, voted “Best Burger” by area foodies; all at very affordable prices.

Chef Charlie Hwang said artisan sausage makers in downtown LA made all of its sausages.

“We wanted a good selection of sausages, there’s nothing like that on this side of town,” Hwang said. “We also knew that customers here are more particular: they want a good burger, they want a good salad, and they want good appetizers. Those were the elements I created for the menu.”

He said their Bavarian pretzel was one of their signature items.

“It’s a great traditional, German pretzel,” he said. “We serve it with American mustard and spicy mustard, but our twist is that we also serve it with nacho cheese as well.”

BRÜ HAUS caters to beyond the 20-something crowd – reaching the more-established Westsiders for a casual business lunch or after hours meet-up. Customers visit for great beer and also for the quality and consistency of its menu and modern décor.

BRÜ HAUS is open for lunch, dinner, and late night meals seven days a week and brunch on Sunday. It is located at 11831 Wilshire Blvd, Los Angeles. For more information, visit www.bruhauspub.com.