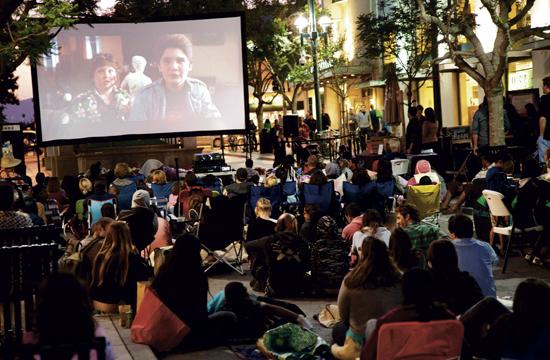 Nothing says summer in a beach town more than watching family-friendly movies underneath the open skies shortly after the sun dips below the horizon. Starting tonight, July 6, Downtown Santa Monica brings back its outdoor film series at the Third Street Promenade.

Entitled “Cinema On The Street,” the four-week film series runs through July 27 and features a quartet of fun titles the whole family can enjoy, including The Sandlot, Ghostbusters, Rio (3D), and Oscar-winning film The Artist.

Screenings are held each Friday night in July, with opening credits rolling at about 7:30 p.m. or whenever the sun’s rays fully disappear from Santa Monica Beach.

Prior to each film’s screening, MI’s Westside Comedy Theater will host a pre-show comedy performance. The outdoor inflatable screen will be located on the northern end of the Third Street Promenade between Wilshire Boulevard and Arizona Avenue. Admission to all film events are free and parking is available at all adjacent city-owned parking structures (pay regular structure rates if entering before 6 p.m. or a flat fee of $5 if entering after 6 p.m.).

All patrons are encouraged to bring beach chairs or a blanket; all four films are ideal for dates, family night outs, and friends hanging out.

The Sandlot, the 1993 film about a group of friends playing a ragtag game of baseball during the summer of 1962, will kick off the Cinema On The Street series on July 6. The ghoulish comedy Ghostbusters, which released in 1984 and starred Dan Akroyd and Bill Murray, will screen on July 13 (coincidentally Friday the 13th).

On July 20, the animated bird adventure Rio, which featured the voices of Anne Hathaway, will.i.am, Jamie Foxx, and George Lopez, will screen in 3D.

Closing out the Cinema On The Street series is The Artist, the 2011 French black-and-white silent film that won five Academy Awards including Best Actor, Best Director, Best Film, and Best Original Score.

Last year’s lineup also included: a film starring Robin Wright (The Princess Bride); a swashbuckling adventure released in the mid-1980s (The Goonies); a sports-themed film (Step Into Liquid); and, a silent movie serving as the series’ finale (The General).