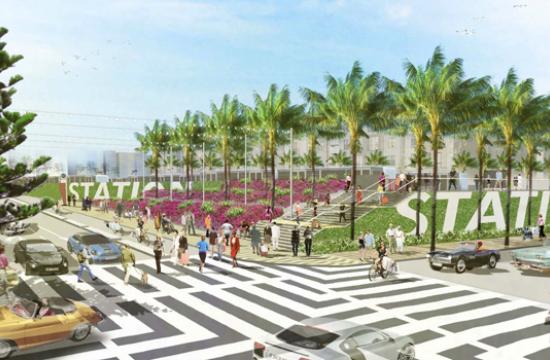 The Colorado Esplanade was supposed to take one step closer in taking shape earlier this month, but City staff withdrew the item from the agenda prior to the start of Santa Monica’s council meeting on Tuesday, July 10.

One month earlier, the Santa Monica Planning Commission discussed scaling back elements of an otherwise ambitious Colorado Esplanade. When the matter was in front of planning commissioners in early June, they discussed altering the types of trees that are included in the project.

Ultimately, the Colorado Esplanade may be scaled back and carry a smaller price tag and potentially save City Hall millions of dollars.

While City Hall had ambitious plans for the Colorado Esplanade, the project was initially approved when Redevelopment Agency (RDA) funds were still available. However, since Gov. Jerry Brown won a legislative and legal battle to rescind RDA funds, Santa Monica was left holding the bag in finding a way to fund the Colorado Esplanade.

A project that was once expected to cost $13.3 million to build has since been reduced.

Colorado Esplanade now has a price tag of about $11 million, with about half the funding coming from City Hall’s Capital Improvement Projects budget. Another $3.3 million is funded in the form of a grant by Metro; the remaining $2 million was sourced from the Palisades Garden Walk budget.

Whether or not the project’s budget dwindles even more remains to be seen.

The project is expected to be complete by 2014.

Considered a priority redevelopment project to coincide with the arrival of the Metro Expo Light Rail line into Santa Monica in 2016, the Colorado Esplanade is a “unique streetscape and circulation infrastructure project located at one of the City’s most prominent sites.”

To be located near the intersections of the Civic Center, Santa Monica Place, and the Santa Monica Pier, the Colorado Esplanade is expected to “become a signature gateway to the City’s Downtown, Civic Center, Pier/Beach and Oceanfront Districts, resolving the complex circulation needs adjacent to the new Expo Light Rail station.”

As part of the project, pedestrian sidewalks in the area would be reconfigured, realigned, and redesigned to “reflect the uniqueness of Santa Monica.”

Other highlights of the proposed project include “signature lighting, … bold framing trees, … (and) gateway designs at the major intersections of 4th Street, Main Street and Ocean Avenue to mark significant crossroads.”

City Hall had selected Peter Walker Partners to assist with the design process.

“The design challenge was to meet the needs of a growing number of pedestrians and bicyclists, and to connect them to the Downtown, Oceanfront and Civic Center, while maintaining an optimal flow for vehicular traffic – all in time to be ready for the opening of the station,” staff reported.

In light of the project’s delicate funding situation, City Hall has not ruled out the possibility of building Colorado Esplanade – a redevelopment project Santa Monica officials believe is essential to the city’s future – piecemeal.

“It is possible to fund the project in phases, expanding boundaries of construction with each phase,” staff said. “The Esplanade improves critical southern entrance intersections and provides access improvements for all downtown projects, and provides specific benefits to projects located on Colorado Avenue, Fourth Street, Second Street and Ocean Avenue.”

As the item was withdrawn from the agenda, council members did not consider the Colorado Esplanade’s final designs July 11.