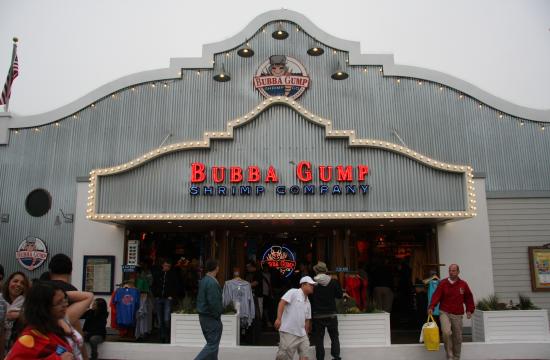 Bubba Gump Restaurant on the Santa Monica Pier experienced an unwanted guest Sunday night when a 35-year-old man under the influence of drugs burst into the restaurant and began knocking alcohol bottles off shelves after police unsuccessfully tasered him outside the restaurant.

At about 10 p.m. officers working night watch patrol responded to the Pier Substation on the report of an African-American man causing a disturbance.

Upon arrival, officers contacted the on duty Community Service Officer assigned to the substation who stated that throughout the day; a male subject had entered the substation several times, causing a minor disturbance.

SMPD Sgt. Richard Lewis said shortly after 10 p.m. the subject returned to the substation to find the doors to be locked.

“The subject picked up a metal newspaper rack and proceeded to throw it up against the glass doors to the station,” Lewis said. “The doors remained intact, but the metal rack broke. The suspect then walked off towards the arcade.”

As officers approached the suspect, they could see that he was acting out by jumping from side to side and yelling incoherently, Lewis said.

“The suspect was also sweating profusely and breathing very heavy,” Lewis said. “Further, the suspect was agitated and scaring people as they tried to pass by him. When officers contacted him, he failed to listen to their commands and continued jumping in front of various people scarring them.”

Upon the arrival of additional officers, the suspect pulled away from one of the officers as he began quickly walking towards Bubba Gump Restaurant.

Due to the suspect’s aggressive behavior officers deployed an X26 Taser just before the suspect could enter the packed restaurant. The Taser had no effect and the suspect ran into the restaurant and behind the bar.

Lewis said officers followed as the suspect started grabbing at several bottles of alcohol knocking them off of the shelves and causing them to break.

“As officers tried to detain the suspect, he began fighting/resisting the officers,” Lewis said. “The suspect and officers fell to the ground, where the suspect continued to resist for several minutes before being handcuffed. As officers started to remove the suspect from the bar area, he began resisting once again and managed to break free from one of the handcuffs. Another struggle ensued and the suspect was re-secured.”

Due to the suspect’s agitated state, and other signs and symptoms of being under the influence of a controlled substance, Lewis said paramedics were called to the scene and the suspect was transported to a local hospital where he remains under medical care and in custody, due to medical issues he was suffering prior to the altercation with officers.

Lewis said the investigation is ongoing and once cleared by doctors, the suspect will be transported to jail where he will preliminarily be booked on the charges listed below.

The Los Angeles man’s name is unavailable until after booked.