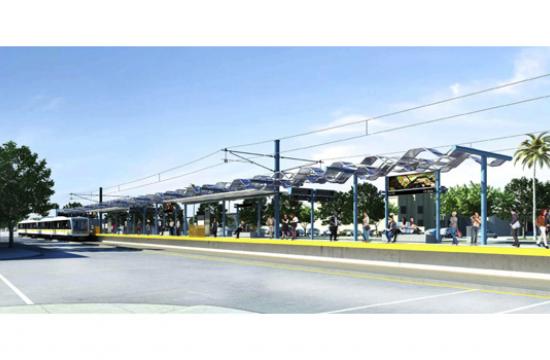 The Exposition Construction Authority held a design update community meeting last Wednesday at Santa Monica Civic Auditorium for Phase 2 of the Expo Line project, which will connect the Culver City station to downtown Santa Monica. With the final design underway, major construction is anticipated to begin August of this year.

Phase 2 of the Expo Line project will run along a 6.6 mile corridor, include seven new stations, some with parking, and is expected to have an estimated daily ridership of 64,000 from downtown LA to downtown Santa Monica by 2030. The project is expected to be complete in 2015 with a price tag of about $1.5 billion.

While construction concerns some Santa Monica residents, representatives from Expo contractor Skanska-Rados stressed at Wednesday’s meeting that communication is key. The company plans to keep the community informed with Facebook and Twitter posts, email blasts, and door-to-door notices for all residences and businesses within a quarter mile radius of the construction work zone.

“The best way to manage the construction process is by keeping people informed on what to expect,” Community Relations representative Torri Hill said during the formal presentation.

Also an issue for some Santa Monica residences is the consideration of bike riders in the final plans.

Gary Kavanagh, one of the appointees for the Bicycle Advisory Committee established by the Expo Board of Directors, attended Wednesday’s meeting.

“The bikeway development on phase one – there were things that were not super great, as far as the quantity of bike parking, and where it was installed. Some of the intersections are kind of problematic for bicyclists to cross,” Kavanagh said.

Santa Monica resident Jerry Rubin said he wished there was a forum at the meeting for the public to voice their concerns or comments.

Regardless, he said he was excited for the completion of the Expo Line.

“I think the Expo Light Rail is a really wonderful thing,” Rubin said. “I’ve never had a car in my life. I take the Blue Bus, I love the Blue Bus, and I’m looking forward to the Light Rail. I think it’s going to be a real boost to Santa Monica.”