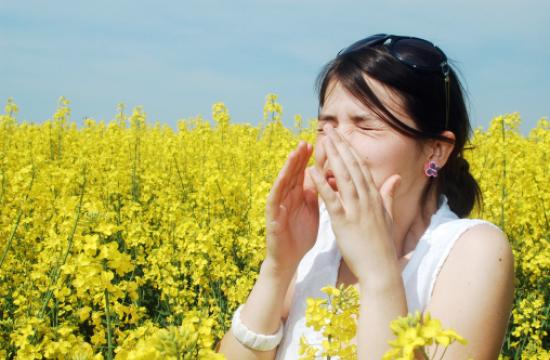 More Americans than ever before say they are suffering from allergies. It is estimated that some 50 million Americans suffer from some type of allergy and the overall prevalence of allergies has been steadily climbing since the early 1980’s – across all age, sex, and racial groups.

Characterized by an overreaction of the immune system, allergies can be triggered by something that is inhaled, touched, swallowed, or injected. This immune overreaction can result in symptoms such as coughing, sneezing, itchy eyes, runny nose, and scratchy throat.

The list of side effects from prescription as well as over the counter allergy drugs is long, with the most common being headache, drowsiness, dizziness, fatigue and dry mouth.

As mentioned above, allergies are abnormal reactions to ordinarily harmless substances. The sensitizing substances, called allergens, may be inhaled, touched, swallowed, or injected.

Allergens that most frequently cause problems are: pollens and mold spores, dust mites and animal dander, foods, insect bites or stings, plants and medications. Other triggers include latex, viruses and bacteria, and environmental conditions (such as cold temperatures). Allergic reactions can occur in one area, such as sneezing or a skin rash, or may include more than one symptom.

Normally, the body learns to defend itself through experience – by encountering, battling and remembering one enemy after another. Allergic reactions occur after the immune system mistakenly learns to recognize innocent foreign substances as potential threats and reacts accordingly.

Why this occurs is still not well understood. The problem has a tendency to run in families (an allergic individual is more likely to have relatives who are allergic than would be expected on the basis of chance alone) but non-hereditary factors apparently play a part as well. Evidence of this is the fact that infants who are breast-fed are less likely to develop allergies than bottle-fed babies.

The reason an individual becomes sensitive to some substances and not to others remains a mystery.

Asthma is an extremely important health challenge that is frequently triggered by allergy. It is such important and widespread problem that we will present a commentary on Asthma in the near future.

Atopic Dermatitis, also known as allergic dermatitis and most commonly expressed as eczema, can be caused by ingesting foods that one has become sensitized to or other allergens. Contact dermatitis is caused by exposure to certain plants (such as poison ivy or poison oak), cosmetics, medications, metals and chemicals. Urticaria, also known as hives, is caused by allergy to foods, such as nuts, tomatoes, shellfish and berries. Hives can also be caused by medications, such as aspirin and penicillin. Symptoms can include skin rash, red and itchy patches on the skin and, in the case of hives, raised welts on the skin.

From staying indoors when the pollen count is high to wearing a mask when mowing the lawn or doing housework, both allopathic medical doctors and integrative medical practitioners would agree that avoidance of known allergens where possible is the best first line of defense.

Other practices include the use of air conditioners and air filters/purifiers, regular washing of bedding in hot water, changing bedding to non-reactive materials and removing other objects that one tends to react to from the home and work environments.

When avoidance of allergens isn’t enough to prevent symptoms, most allopathic doctors will prescribe medications, usually an antihistamine, a decongestant or a steroid nasal spray and more often than not, a combination of all three.

While these drugs usually, though far from always, do a pretty good job at alleviating symptoms, they do nothing to actually improve the body’s ability to better handle the allergen and, as mentioned earlier, they can produce side effects that range from merely unpleasant to downright dangerous.

Commonly prescribed antihistamine and decongestant drugs such as Allegra and Zyrtec, as well as those available over the counter like Claritin and Benadryl, may cause sleepiness, dizziness, headache, fatigue, dry mouth, sore throat, stomach upset and visual changes.

Decongestants may produce many of the same side effects as antihistamines as well as rapid or irregular heartbeat, increased blood pressure, irritability and upper respiratory tract infections.

Subcutaneous Immunotherapy (SCIT), also known as “allergy shots,” is commonly employed by mainstream allergist in an attempt to desensitize the body to the allergens it is reacting too. This procedure involves a series of injections for a minimum of six months with maintenance injections over the next 3 – 5 years. These shots may cause the same allergic reactions that they are attempting to prevent. More recently an oral version of this procedure, Sublingual Immunotherapy (SLIT), has been developed in Europe. Although not yet approved in the USA, it is being used here by some doctors. However, this is not unlike homeopathic desensitization (see below) which can accomplish the same goal without side effects.

There are several nutrients which are quite helpful when it comes to allergy. Vitamin C of course is a staple of the natural armamentarium and helps strengthen the body’s defenses. Others helpful nutrients include the herbs Butterbur and Stinging Nettle, the antioxidant Quercetin, the carotenoids (beta-carotene, a Vitamin A precursor for example) and omega-3 fatty acids as found in fish oil, flax seed and walnuts.

There are many different homeopathic remedies which address various allergy symptoms but their selection is based on an individual analysis of the symptoms being expressed which can be confusing without the assistance of an experienced homeopathic practitioner. This is why I developed Dr. Garber’s Natural Solutions for Allergy. It is formulated to address the root cause of the allergic response and therefore covers a wide range of allergic symptoms from many different causes while producing no side effects.

Homeopathic nasal sprays are a good alternative to steroid based spays. Irrigating the nasal passages with a saline solution using a neti pot helps wash pollens out and relive swollen nasal membranes.

Homeopathic preparations of most common allergens are available and, like the immunotherapies mentioned above, may act to desensitize the body over time. These can be used in conjunction with the other natural remedies and work best when exposure to the allergen in question can be avoided.