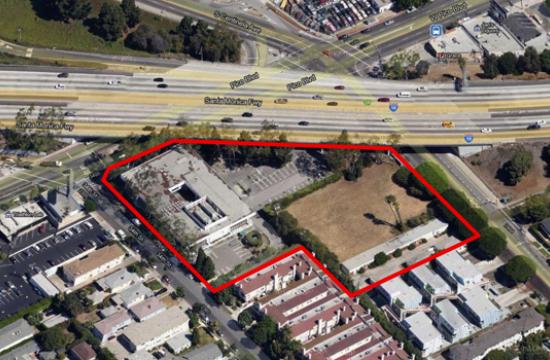 Preliminary plans for a mixed-use project in Santa Monica at the eastern border of the city were met with apprehension from residents at the Planning Commission on Wednesday night.

The project calls for 300 residential units, more than 500 parking spaces, and about 5,000 square feet of ground-floor commercial area.

As portions of the proposed project would exceed 47 feet in height, the developer is required by City Hall to enter into a DA.

Through the DA, City Hall hopes to “achieve a building density, layout, and design” that is consistent with the Land Use and Circulation Element (LUCE) and negotiate with the developer community benefits and a Transportation Demand Management (TDM) plan.

Among the concerns expressed by the public in about an hour’s worth of public comment: the project would increase traffic in an already congested area and an influx of new residents translating into more students enrolled at local schools.

Whatever the concerns were, planning commissioners said this DA proposal was in the very early stages and a lot of issues still need to be ironed out.

“This is a float-up. It is a very preliminary discussion of this project,” Planning Commission Chair Gerda Newbold said. “Regardless of what we say tonight, the applicant can go to city council and request that they proceed with the development agreement. We’re in the very, very early planning stages. This is more of a courtesy discussion for the developer than a… decision time.”

Vice Chair Ted Winterer said many of the concerns brought up by the public would be addressed throughout the DA process.

“Certainly the traffic will be looked at. It’s all conjecture right now to say traffic will be worse, the same, or better,” Winterer said. “We do have this no new net trips policy in the LUCE. I think a lot of us on this commission and the council would be reluctant to approve a multitude of projects that are generating new car trips without at some point tackling that issue.”

He also tried to quell concerns of increased student enrollment.

Some residents were worried local schools already had a high student-to-teacher ratio and that proportion would only get worse by allowing a new residential development to be built in Santa Monica.

However, Winterer said the increasing number of students assigned to one instructor is not the result of new residents moving to Santa Monica but instead an inability to pay for new teachers thanks to budget cuts at the state level.

All in all, commissioners wanted to see how the DA process would play out before making any final recommendations to the city council about the proposed project.

As for the project itself, both staff and the developer acknowledged there is still plenty of work that needs to be done before the proposed plans are considered final.

A senior planner with City Hall told commissioners that the developer has yet to chose an architectural style.

“Overall design discussions between the applicant and the City design team have been kept to a general level during the conceptual phase of the proposed project,” a City staff report said. “The applicant has not identified any specific architectural design styles or features at this early point in the process. Comprehensive project plans will be refined during the Development Agreement process based on direction from the Planning Commission and City Council.”

City staff did point out a few guidelines of how the design process would take form with respect to 3402 Pico.

For example City Hall hopes the project will have a “gateway presence” as it will be one of the first things people will see when entering Santa Monica from West Los Angeles.

“The project serves as an entry presence for motorists and pedestrians entering west into Santa Monica along Pico Boulevard,” City staff said.

Also recommended were the development of purposeful facades, establishment of neighborhood-serving ground floor retail, and the promotion of pedestrian-friendly features.

According to City staff, the proposed project is already consistent with certain aspects of the LUCE. For example, it would provide “a range of housing choices to meet the needs of residents continues to support healthy, diverse neighborhoods.”

The proposed project may also encourage “buildings with a variety of heights, architectural elements, and shapes to create visual interest along Pico Boulevard.

Thirdly, if the plans are realized, the 3402 Pico project would encourage “affordable and workforce housing in proximity to transit and major employment centers.”

Finally, the proposed development may “make a range of housing options available in multi-family neighborhoods to suit the spectrum of individual lifestyles and space needs.

As the proposed DA was part of a float-up, a decision on the project is not likely imminent. According to City staff: “The site currently contains an existing vacant three-story office building that formerly housed the National Academy of Recording Arts and Sciences at the northwest corner of the site and eleven vacant multi-family residential units located at the southern end of the site.”