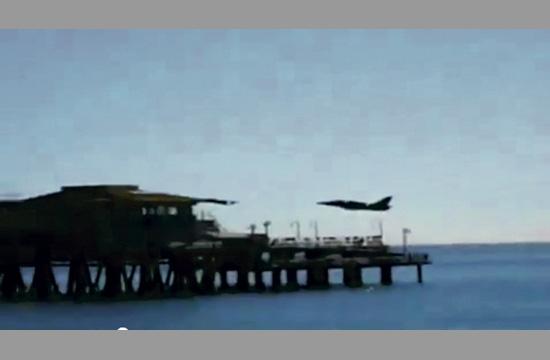 The pilot who buzzed the Santa Monica Pier almost four years ago and was later convicted for recklessly operating an aircraft in violation of the California Public Utilities Code had his probation reportedly revoked June 25 by a Los Angeles Superior Court commissioner for failure to complete community service.

After his conviction in June 2010, Riggs reportedly only served one day of his jail sentence due to overcrowding at the county’s facilities. In failing to complete his community service, Riggs not only had his probation revoked but was also ordered to do 20 days of beach cleanup by Sept. 27, 2013 or face a six-month jail term.

With probation revoked, Riggs would not be able to alter his conviction through any early release, good behavior, or work time served programs.

On Nov. 6, 2008, Riggs was accused of flying an Aero Vodochody L-39 Albatros, a Soviet-era, Czech-built military jet trainer, too close to the Pier and State Beach. There was also a second plane involved, but according to the Federal Aviation Administration (FAA), the pilot of that aircraft, Vietnam War veteran Skip Holm, was not charged or convicted of any crime.

Amateur video on You Tube shows the planes flying just above the Pier and relatively close to the shoreline along the State Beach. At certain points, Pier visitors are seen running away from the planes; screams are clearly audible. Several 911 calls were reportedly made during the brief aerial display.

Interestingly enough, Riggs has been embroiled in several legal issues involving the Czech-made Albatros and other sketchy activity.

According to news reports, federal officials are investigating Riggs regarding a fatal crash of in Boulder City, Nev., where he was allegedly flying side by side with another Albatros just before it plunged into the desert, killing the pilot.

The Los Angeles Times reported that Riggs is also subject to civil litigation in a breach of contract and fraud case. Filed in Los Angeles Superior Court by 31 plaintiffs, the lawsuit seeks to hold Riggs accountable for nearly $3 million invested into a production company – Afterburner Films – he oversees. News reports indicate Riggs was working on a film involving American and Russian military jets.

Other litigious matters cited by court documents include a criminal conviction with time served in Hong Kong, as well as bank, passport, and wire fraud here in the United States.

Riggs had earned his pilot license in 1984, according to the FAA.