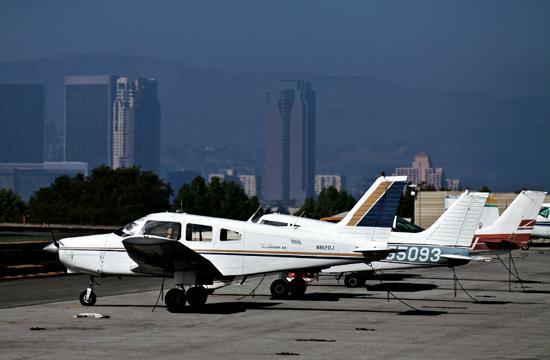 A proposed plan to provide flight schools at Santa Monica Airport (SMO) a cash incentive to their respective programs at nearby airports has been indefinitely tabled by council members Tuesday evening.

“Although the experiment was intended to reduce patterned flying above and around Santa Monica and our neighboring cities … with little impact on surround airports, I’ve concluded that our public fears and perceptions have escalated to the point that it is impossible to imagine that this test would be able to receive fair and objective evaluation.”

A June 26 council vote did not garner enough votes to approved the test program, which would have created a pay program to have SMO’s flight schools train at other Southern California airports.

However, a dissenting vote by Council member Bob Holbrook invoked a rarely used technicality. Since the proposed incentive program was an appropriation, at least five council members were required to be in favor of the proposal.

With only five council members present at the June 26 meeting, Holbrook’s dissent meant that there were only four votes in favor of the proposed incentive program, not enough to force flight schools to consider operating elsewhere.

According to city council procedure, appropriation measures must have at least five members on the dais vote in its favor. It is essentially a rule that requires support in excess of two-thirds, not a simple majority, of the entire council (not just those present) to be approved.

With two council members June 26, the pay to train elsewhere initiative could only have been formally adopted with a unanimous 5-0 vote.

After the 4-1 vote, council members and staff agreed to table the agenda item until July 10.

As council members and members of the public prepared for Tuesday night’s meeting, staff had proposed to the dais that the agenda item be tabled indefinitely.

The proposed incentive program would have, if approved, appropriated $90,000 over a six-month period to be paid to SMO’s flight schools. The money was to be used as a reimbursement “who conduct repetitive takeoff and landing practice” to do so “at other area airports during weekends and federal holidays only.”

As part of the test program, flight schools would have been reimbursed $150 per qualifying flight to cover the costs of flying to an airport other than SMO.

Staff hoped that by creating such a program where flight schools trained at other airports on weekends and federal holidays, residents of Santa Monica, Mar Vista, and Venice would enjoy a reduction in airplane noise and the risk of crashes into local neighborhoods would be minimized.

In his June 26 dissent, Holbrook said he believed there was not enough public support in favor of the proposed pay to train elsewhere program.

“To date, not one single person who I’ve received an email from or talked to, including leadership of the different groups around the airport, wants us to do this,” Holbrook said two weeks ago. “The people just don’t want us to do it.”

If it were approved, the test program would have gone into effect on July 1 and continued through December 31.

According to City staff, nearly 40 percent of SMO traffic is local flights.

Mayor Pro Tem Gleam Davis and Council members Bobby Shriver and Pam O’Connor were not present during the vote, which took place just prior to closed session.