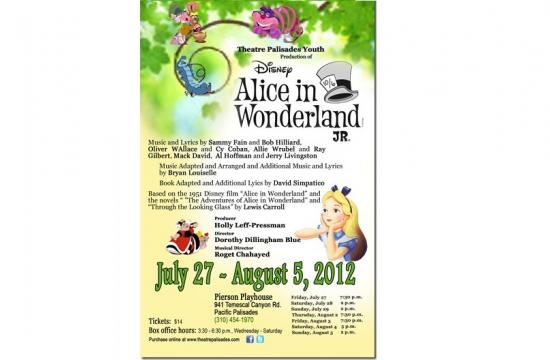 For several weeks, 26 children, many of whom are Santa Monica residents, have been hard at work rehearsing for Theatre Palisades Youth’s latest play: “Disney’s Alice in Wonderland JR.”

Volunteer producer Holly Leff-Pressman notes that while the actors’ ages range from seven to 14, its really just great community theater. According to Leff-Pressman, the play showcases some of Santa Monica’s most talented, as a result of a “pretty intensive” audition process.

The cast has been rehearsing 30 hours a week, and will start 40-hour weeks leading to the July 27 opening night.

“What audiences can expect is 26 of the area’s most talented and energetic performers bring the classic Disney film ‘Alice in Wonderland’ to the stage. It includes all the great music from the show, and it’s a show for young and old,” Dorothy Dillingham Blue, the show’s director, said.

“There are great characters, a lot of audience participation for the kids, and a lot of fun, classic film references for the adults. You won’t be rolling your eyes, rather, you’ll be tapping your feet.”

Blue said Disney’s Alice in Wonderland JR” was chosen for its ability to resonate with people of all ages.

“As the director, I’m really looking forward to the characters breaking that fourth wall, and getting the audience on their feet, singing and dancing along with the characters,” Blue said. “Whether you’re three or 83, get ready to dance.”