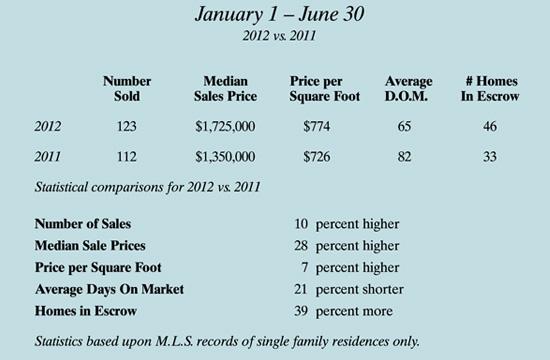 As we begin the second half of 2012, there are 68 single-family Santa Monica residences listed in the Multiple Listing Service (M.L.S.). There were 123 Santa Monica homes sold in the first half of 2012 (which is 10 percent higher than this time last year), and there are currently 46 homes in escrow in Santa Monica.

There are currently 113 leases available in Santa Monica. They range from $1,350 per month for a one-bedroom, one-bath on Bay Street, to $45,000/month for a two-bedroom, two-bath home on Amalfi Drive in the canyon. So far in 2012, 301 Santa Monica homes or condos were leased. The highest lease was a four-bedroom, five-bath on Kingman for $29,000 per month, and the lowest was a studio apartment on Maple Street for $1,000/month.

This information is based on MLS records, and is deemed reliable, but not guaranteed. The “median” is the value of the middle home when the homes are arranged in an increasing order of prices.

Michael Edlen of Coldwell Banker, ranked in the top 1 percent of all agents nationwide, has been keeping statistics and tracking local housing trends for many years.