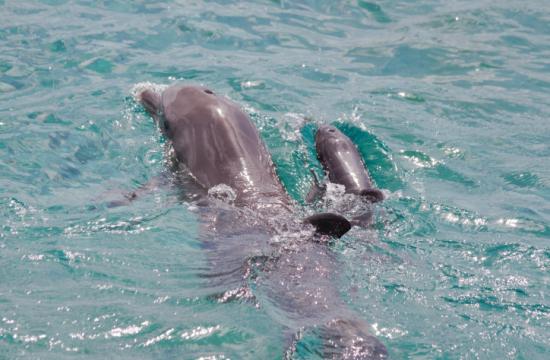 This past Tuesday morning, I was surfing right off Tower 26, or trying to, I’m not an accomplished surfer by any means. There were tons of dolphins in the water, way more than typically are in that close. There must have been a fish run. So many dolphins, that the guy surfing 20 yards north of me called over, “It’s like Sea World out here today!”

Glassy conditions, lousy waves. I went outside to wait for a more reasonably sized set.

There were groups of dolphins pretty much on all sides of me. But this one group kept swimming in circles then circled me, with one of the group breathing much more frequently than normal. So much so, that I thought to myself, “My, you have stinky ocean breath.”

Also, dolphins don’t normally circle you, but swim past.

This odd behavior made me start worrying about that dolphin. I know our bay isn’t the cleanest, and it was clear that they were all there because they must be eating some kind of fish that was on a run. I was worried that the one behaving oddly had eaten something it shouldn’t have and was having problems as a result.

This group swam out a little further towards 10 o’clock. Then the same dolphin was sort of rolled over on it’s side and it looked like there was a dolphin tale coming out of it’s belly with something tangled around it.

The two other dolphins underneath her were holding the other half in half out of the water. I didn’t realize she was giving birth, but thought she was dying with the way that weird tail looked and the fact her air hole appeared to be under water.

I called out to the guy who’d made the Sea World comment and I yelled “that one’s in trouble” and took off paddling as fast as I could, thinking I was going to pull it onto my board and save it or some crazy nonsense. I thought the other dolphins were trying to help save her life but didn’t realize they had it’s air hole submerged. I thought it was going to die.

When I got there, the two helper dolphins dove and the other rolled over and submerged. It was scary few moments. I immediately felt terrible that I’d paddled over and scared the helper dolphins and caused them to abandon the one that was struggling, possibly causing her death.

But when they surfaced, there were three dolphins, plus a baby.

The littlest dolphin I’ve ever seen, but still pretty darn big, almost three feet and swimming already. With this cute little dolphin face. They all swam about a little. Two of them just beneath the baby gently guiding it up and down to the surface to breathe. The baby’s small fin was bent and wrinkled.

When I got home, I looked up dolphin births and discovered that they are born tail first so that the baby’s air hole is not exposed to the water too early. A bent fin is another sign of a new born.

I did not notice or know to look for fetal stripes, the tell tale sign left from the baby being folded up in it’s mamma’s womb.

There wasn’t a whole lot of information on dolphins helping other dolphins on the internet, but there seemed to be tons on dolphins being doulas. Though keeping them caged seems pretty inhumane.

It’s amazing the life that exists right in our bay. It makes me feel even more strongly about trying to keep it clean from gasoline, oil, and plastics. Let’s all protect our new baby.