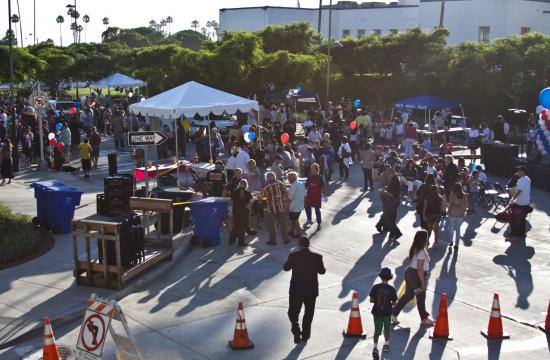 Santa Monica community members are invited to join forces with Chief of Police Jacqueline Seabrooks, the members of the Santa Monica Police Department, and thousands of communities nationwide to celebrate the 29th Annual National Night Out event on Tuesday, August 7.

National Night Out will involve more than 15,325 communities from all 50 states, U.S. territories, Canadian cities and military bases around the world.

SMPD Sgt. Richard Lewis said National Night Out was an opportunity for the Santa Monica Police Department to honor the exceptional relationship the police and community share together.

“This partnership allows the City of Santa Monica to be a safe place to live, work, and visit,” Lewis said. “The event is designed to generate support for, and participation in, local anticrime efforts. It strengthens neighborhood and police-community partnerships and sends a message to criminals letting them know neighborhoods are organized and fighting back.”

The event will be held in the Santa Monica Civic Center parking lot from 6 p.m. to 8 p.m. Along with showcasing the Department’s personnel and equipment, there will also be local bicycle vendors, driving demonstrations, a giant inflatable fire engine slide, a rock climbing wall, carnival games, food trucks, and more.

Free food and drinks will also be available and free parking is available in the Civic Center Parking Structure located directly across the street from the Public Safety Building.