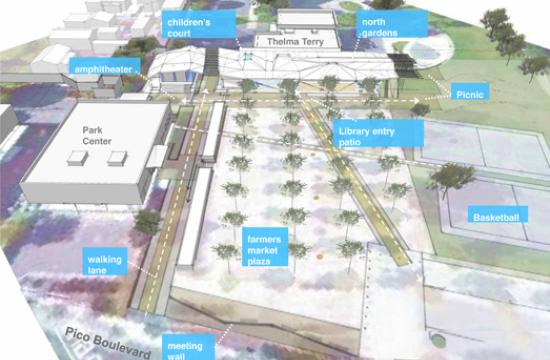 The bill to build the latest addition to the Santa Monica Public Library (SMPL) system just became a little pricier, as council members approved July 10 the fifth modification to the contract to build the city’s fifth library at Virginia Avenue Park. It will now cost City Hall almost $1 million to build the Pico Branch Library.

City Hall approved in February 2010 a contract for Koning Eizenberg Architects, a California-based company, “to provide additional scope of work to complete the Pico Branch Library Project.” That contract was valued at $882,590.

Council members unanimously voted as part of its consent calendar July 10 to add another $85,348 to the contract value, meaning City Hall would now shell out $967,938 to make Pico Branch Library a reality.

The additional funds would be used to build a Rainwater Harvesting System.

With the contract modification, Koning Eizenberg Architects will have an additional two months to complete the project, costing City Hall more than $16,000. Previous agreements limited the construction period to 12 months. Under the modification, construction has been extended to 14 months.

The modification more than doubles the number of allowable site meetings at Virginia Avenue Park during construction; a total of 54 site meetings may take place during the course of Pico Branch Library’s construction, up from the previous cap of 26.

City Hall had planned for groundbreaking and construction to commence during this summer season, with doors officially opening for area residents in late 2013.

Pico Branch Library will be located at Virginia Avenue Park, south of the Thelma Terry building and north of where the Farmer’s Market there is held.

The two-building library located on Pico Boulevard near Cloverfield Boulevard will total 8,690 square feet; the main building, almost 7,900 square feet, will include popular collections for all ages, a children’s area, public computers, and a study room.

A 800-plus square foot annex building will house a community room for story readings and other events. Plans also call for an outdoor amphitheatre.