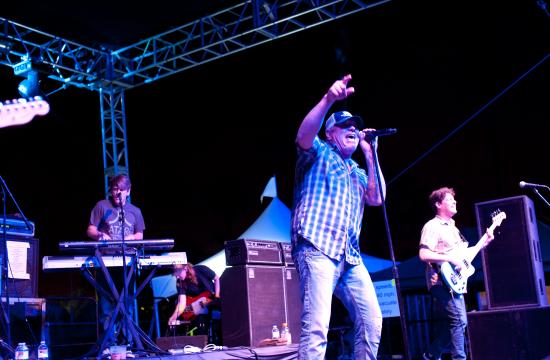 The band played hits such as “All Star,” “I’m A Believer,” and “Walkin’ On The Sun” as well as a couple of their tracks from their new album “Magic” set to be released September 7 as part of the entertaining, yet meaningful evening to raise money for local non-profit Walk With Sally.

Earlier in the evening, supporters — who dressed in all white attire — sampled bites from some of the South Bay’s best restaurants, enjoyed cocktails from Patron’s Ice Bar, and bid on the evening’s premium silent auction, whose proceeds go directly to Walk With Sally’s programs.

“Each year, White Light White Night serves as an opportunity to share the stories of the hundreds of children in Los Angeles who get lost in the mix when a loved one is diagnosed with cancer,” said Nick Arquette, founder of Walk With Sally. “This event gives those children a voice and allows us to fund existing and new friendships with mentors. Without the support of our community, we would not be able to impact those children’s lives the way we’ve been doing during the last five years.”

Last year’s White Light White Night event raised more than $150,000 for Walk with Sally’s mentorship program for children whose parents or siblings are fighting or have died from cancer.

While this year’s fundraising total is still being tallied, organizers hoped to reach a quarter-million dollars.

“This year, Walk with Sally’s goal is to raise $250,000 in order to serve the more than 200 children in Los Angeles that could benefit from Walk With Sally’s mentorship program. By next year, we hope to increase mentor relationships by 30 percent and open a new Walk With Sally center,” Arquette said.

The event was sponsored by Momma Mia Worldwide for the second year in a row.