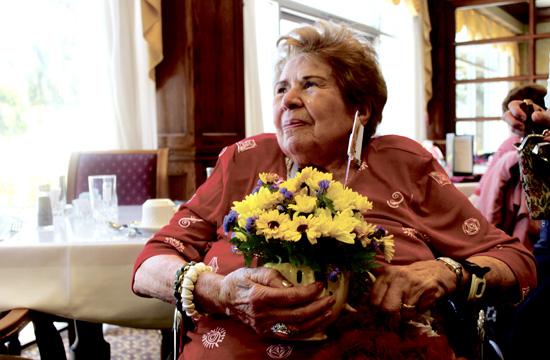 When Zirel Sweezy sat down to her usual lunch on Tuesday, she did not suspect anything out of the ordinary would happen at the Ocean House retirement home at 2107 Ocean Ave. where she has lived for the past nine years.

Much to her shock, a group of people surprised her and brought her to joyful tears. Unbeknownst to her, the Ocean House was one of many chosen locations for Teleflora’s Make Someone Smile Week, a program in its 12th year that uses donated flowers from wholesale growers and volunteers to make unexpected floral deliveries to hospitals, nursing homes, and assisted living facilities across the country.

Upon receiving her bouquet, which, like all of the Make Someone Smile Week flowers, is arranged by volunteers and florists and placed in a bright yellow “Be Happy” mug donated by Teleflora, Sweezy was overjoyed.

“It means a lot to me. It brings me to tears because it’s such a nice thing,” Sweezy said. “These are beautiful. Nothing as good as this has happened before.”

The idea behind Make Someone Smile week is that an easy way to elicit a smile is through an unexpected gift of flowers.

Ocean House resident Beth Winters was one of the many residents who smiled as a result of receiving the surprise gift.

Terri Alvarez, of The Flower Shops in Forest Lawn, donated her time, flowers, and expertise, saying that the smiles made it worth it.

Earlier in the day, she said a recipient at a veterans hospital even broke spontaneously into song, he was so happy.

“We got serenaded, it was awesome,” Alvarez said. “It was an unbelievable moment. I think the most rewarding part is that people are not expecting it – they think that no one has remembered them.”

Last year’s program spanned more than 200 cities throughout the United States and Canada where more than 1,000 florists donated their time. This year, Teleflora and volunteers created 30,000 arrangements, to great success.

“What a joy,” Winters said, admiring her arrangement. “What a wonderful, happy thing.”