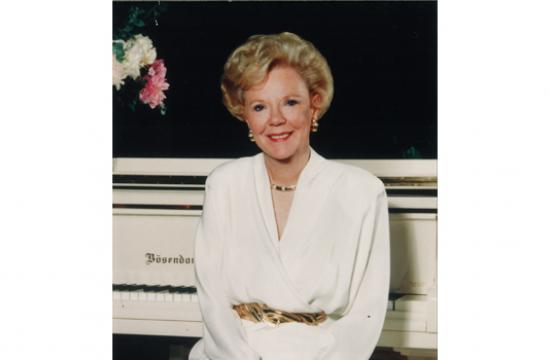 Twenty years had passed since Paul Conrad’s “Chain Reaction” public art peace sculpture was constructed in the Santa Monica Civic Center in 1991. Then, last year, someone mentioned to me that it was Joan Kroc who donated the $250,000 sculpture construction cost so that Mr. Conrad could gift the iconic sculpture – as he wanted – to the City.

I hadn’t known. I only knew it was an anonymous donation. I can’t even remember who first told me. I was very pleasantly surprised. But not really all that surprised. After all, as a longtime peace and anti-nuclear activist, I had known for many years of Joan Kroc’s philanthropy to benefit causes and projects promoting global nuclear disarmament. After her husband Ray Kroc, the CEO of McDonalds, passed away in 1984, she acquired his fortune and was unsurpassed in her generosity, donating millions to what was, and still is, one of the most important concerns facing all of humanity, the threat of nuclear weapons escalation.

In the past year, as the “Save Chain Reaction” efforts began, I’ve heard many people speak of Joan Kroc’s sculpture funding donation. But I haven’t as yet seen it reported publicly. And just the other day while reading the Wikipedia information about Joan Kroc, I noticed the following, which convinced me that perhaps now is the right time to make her

“Chain Reaction” peace philanthropy more public: Wikipedia states: “Kroc was also politically active. In 1985, she spent millions of dollars in support of nuclear disarmament, which included reprinting the book “Missile Envy” by Helen Caldicott, as well as publishing ads in major newspapers calling for disarmament. In response, Cal Thomas, a conservative syndicated columnist, called her a “Mc Nut.” But it was the next paragraph that really caught my eye. Wikipedia states: “She is affectionately known by the citizens of Grand Forks, North Dakota and East Grand Forks, Minnesota as the”Angel” because of her anonymous $15 million donation to assist the cities after a devastating flood occurred there in 1997. She was revealed as the source of the funds after reporters tracked down ownership of the jet that she used to fly into the area to survey the damage.”

My point is that Joan Kroc’s anonymous donation was made public by some reporters, and that I’m reading of it on Wikipedia.

And people were calling her an “Angel.” Not because she asked for that recognition, but because of her assistance and generosity.

I believe that if Joan Kroc were alive today, having passed away in 2003, she would again donate more to have “Chain Reaction” refurbished and strengthened.

Paul Conrad inscribed at the base of “Chain Reaction”: “This is a statement of peace. May it never become an epitaph.”

Both Paul Conrad and Joan Kroc fully understood the importance of that message, and the unique, creative and timely importance of “Chain Reaction.”