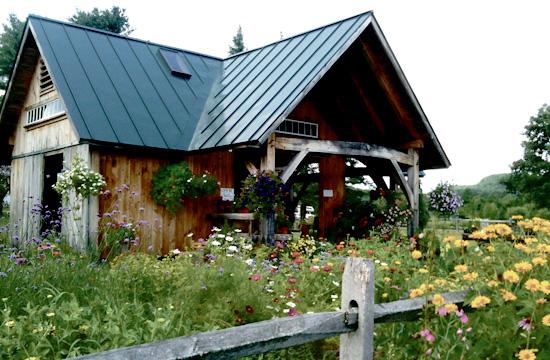 Hens were pecking at the grass in the yard. In the screened in room there were piles of beets and sweet corn, greens of all sorts, cucumbers, tomatoes, potatoes, eggs, homemade berry pies, and jars of homemade pickles and relishes.

Driving by this farmstand, looking in, but seeing no one, I kept on driving through the green farm and horse country of Strafford. Then, one day, someone was there and I went in. “I’m so glad you’re open,” I said to the woman who was there. She was Rose, and she and her husband, Earl, own the farm and the farmstand.

“Open?” Rose asked quizzically. “We’re always open.” It was then that I learned that Rose’s Farmstand, like many others in Vermont, operated on the honor system. The screen door was always unlatched and there was a tin box on the counter to put money in to pay for what you were taking home.

The farm had been in Earl’s family. He was brought home to this farmhouse right after he was born. Now, all these years later, he was out back, on the tractor, and Rose and I sat in the farmhouse kitchen. The farmhouse was built in 1875, the floors are the original wood planks of varying widths, painted green, heat comes from two wood stoves and Rose said they “keep the house toasty.” The wood comes from the trees on the farm. Kitchen implements and books were everywhere. We sat at the kitchen table, listened to the sounds of the farm and we talked.

Rose had been the clerk at Colburn’s General Store and when she retired she started a kitchen garden of potatoes and cabbage, tomatoes, beets, onions, and herbs. The garden did so well that she put a picnic table, made by Earl, out by the street and her dog, Cracker, would sit by the table and alert her when people came. The picnic table veggies sold so well that Earl had the idea to farm more of their land and to have a farmstand and I, for one, am glad.

“The farm makes enough produce to feed us, give produce to our grown kids, and to make enough to pay expenses and the taxes on the land,” she says. “Farmers in Vermont have a special tax rate, so taxes aren’t too high for us.”

When asked how she learned to farm Rose said she was a flatlander – a Vermont term for people not born in Vermont.

“I grew up in Massachusetts, just outside Boston,” she says. “I learned to farm as a kid and you learn to love what you do when you are picking tomatoes beside your father.

“But people think I’m a Vermonter now because I fit right in with the Vermont way of thinking,” she says. “We’re independent and self-sufficient. But if someone in Strafford has an accident or gets ill, magically their garden is weeded if it’s summer or the snow is shoveled if it’s winter. It’s an easy-going lifestyle. Most generally people are accepted for what they are. We make decisions at Town Meeting. You are heard, tell what your feelings are and are part of everything.”

The Crossroad Farmstand, in Post Mills, is an open air, roofed in stand on the 60-acre Crossroad Farm, started in 1980 by Tim and Janet Taylor. They currently have about 35 acres in cultivation. The farmstand is open from June through October and they get hundreds of customers everyday so their farmstand is staffed, as they need to keep replenishing their produce stock. The most popular crops are sweet corn, melons, strawberries and greens like kale, spinach, chard, and a variety of lettuces.

According to Philip Mason, 26, the farm manager, the farm season starts in February when they start the first greenhouse tomatoes and leeks and onions and bedding plants and goes through November. Philip started at the farm as a summer worker throughout high school and college. He earned his Bachelor of Science degree and then came to work full time on the farm.

“The farm philosophy is one of sustainability,” says Philip. “We decided not to go for certification as it would raise the price we would have to charge for our crops. But for the past 30 years we’ve been using IPM (Integrated Pest Management) strategies. That means that we build better soil and practice crop rotation. For example, if brassicas (broccoli, brussel sprouts, and more) are in the same plot of land every year a particular worm will build up, but if you move them, the worm doesn’t get a good chance to get started. If we do spray we use some organic and some non-organic sprays. Mostly we don’t spray at all. Also, it’s a misconception to think there’s no spraying on organic farms, what’s important is not the spraying as much as the toxicity rating.”

He says they hire locally and sell locally.

“Right now we have 18 people working on the farm,” he says. “We also hire through the Minnesota Agricultural School program, which is a work exchange program for student interns.

“The farm is profitable, with farm workers paid from $9.50/hour up to $20/hour, depending on their level of experience and responsibility. Currently we have three crew leaders and 15 farm hands. As the manager, I oversee general operations and all wholesale accounts with local stores and restaurants. The crew leaders execute daily farm tasks and direct farm hands.

“The best thing about being a farmer is working outside, the tasks are diversified and you need to be skilled at many trades. The worst is that your success can be determined by the weather, that your livelihood can be out of your own control.”

Philip goes off to harvest melons, Halona, and Athena cantaloupes.

“Thanks for thinking of us,” he says to me.

Andrew Herrick, 27, is a crew manager. He works with a crew of three or four. They start the day at about 6 a.m., picking lettuces and then working their way through the day’s tasks. The order of picking is determined by what is good for the vegetables. Lettuces first, melons last today.

Andrew holds a BS in Ecological Agriculture from the University of Vermont.

“They teach with a focus on small scale and organic farming,” he says.

He points out that larger, industrial scale Ag is dependent on fossil fuels as they ship their produce across the country.

“It doesn’t make sense,” he says. “Sustainability includes creating your own fuel. We farm 35 acres, but we have many more acres of forest that provide shelter and habitat and are used for fuel. This farm is a great model. We hire locally, we only provide produce for local markets, restaurants and camps. Fifty percent of our crops are sold at wholesale prices to local stores, 25 percent go to the farmstand and 25 percent to local restaurants and camps.”

Thinking about the future of small farms, Andrew said young people in Vermont were going back to farming.

David and Sara Pierson own the Pierson Farm and Farmstand, in Bradford.

David, a third generation farmer, said the people there wanted to know where their food comes from.

“We get lots of support from the community and from younger farmers and from the State,” he says. “It’s not hard to be a small farmer in Vermont.

“We are also supported by CSA (Community Supported Agriculture). Belonging to CSA is a simple as joining CSA and paying for a share. That gives us up front money for the work of the farm. When the produce comes in CSA members buy what they need at reduced prices or, in some cases, pay enough in shares so that they are entitled to a certain amount of produce, essentially they pre-pay. There are many different ways to organize a CSA group, depending on the needs of the members.

“My grandfather had 200 plus acres up in the hills which he sold when he was in his early 60’s. He then bought this place as a ‘retirement farm.’ It’s about 13 acres. I’ve lived here all my life, except when I went to college. Sara was born in New York City and moved to Hanover when her dad got a job at Dartmouth. They were artsy people and I was a farm boy, but it’s worked out,” he said, smiling at Sara.

Sara says she appreciates the “closeness with the community, being in a small town and knowing everyone. It makes people trusting and you see the good in people. Trust builds trust.”