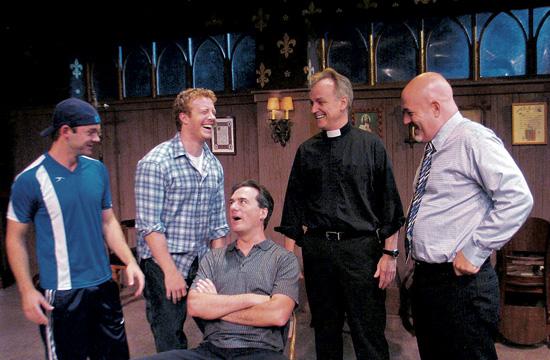 Odyssey Theatre Ensemble’s Artist Director Ron Sossi, the face of Equity Waiver theatre in Los Angeles, has scored yet again with Martin Casella’s “The Irish Curse,” a rip-roaring comedy/drama that ultimately delves deeply into the psychological effects on men who are anatomically challenged and how it impacts on their lives.

Under the masterful, sensitive direction of former Laguna Playhouse Artistic Director Andrew Barnicle, the play, performed on a detailed, authentic set by Thomas A. Walsh, begins as Joseph Flaherty (Scott Conte) and Rick Baldwin (Austin Hebert) enter the basement of St. Sebastian’s Catholic Church in Brooklyn Heights and begin setting up chairs for a support meeting along the lines of Alcoholics Anonymous. The two men immediately launch into musings on their “condition,” with southerner Joseph lamenting, “If I don’t get laid soon, I’m gonna f… the chairs.” Rick on the other hand, although he has a girlfriend who he loves, appears to be obsessed with women and brags about picking them up in a variety of places, including a courtroom.

The banter continues and soon they are joined by another member of the group, Stephen Fitzgerald, (Shaun O’Hagan) who is a 38-year-old NYPD gay cop with a “dick the size of a cocktail weiner.” Having been humiliated in his youth, he has compensated for his “condition,” by giving indiscriminate oral sex, careful never to reveal his penis and never ask anyone’s name. The facilitator of the group is Father Kevin Shaunessy (Joe Pacheco) who eventually discloses that he is likewise challenged in that department and insists that the group understand, “I am not my penis” and that they should not refer to it not as a problem, but a “situation.”

A young man with a thick Irish brogue by the name of Keiran Riley (Patrick Quinlan) enters the room. He is attending the meeting for the first time and is quite agitated. He immediately becomes confrontational, goading each of them into being honest. One by one, each of the men takes turns sharing, with 22-year-old Rick, who makes himself look bigger by “putting a sock down there,” revealing that his brother killed himself because of his “situation.” He later confesses that he is all bravado and really isn’t a womanizer and is actually faithful to his girlfriend.

Stephen’s share is a litany of negative experiences with Father Joe finally saying “Something good must have happened this week.” Stephen replies “Yeah, but I have more crappy stuff.” Stephen complains about men in the locker room walking around without towels with their things hanging down, a tormenting sight for someone under-endowed to endure.

The mild-mannered Joseph is a 43-year-old lawyer living in New York City. He wife has left him and their two daughters and ran off with a guy who is well hung. To add insult to injury, she actually drew a picture of her boyfriend’s large member and next to it drew a tiny box indicating Joseph’s tiny package, the size of a bottle cap, would “fit here.” He describes his childhood as making sure he stayed invisible for fear of anyone seeing his penis, adding “I’m tired of being invisible.” Laughs abound as he comments on over-endowed men “Walking down the street with the Chrysler Building in their pants…It scares the children.”

Perhaps one of the most poignant stories comes from Father Joe who Keiran goads into sharing. The good Father reveals that although his is the size of bee poop, “I do have girth,” which gets a big laugh. As a youngster, he was constantly teased in the locker room because of his “stump.” When asked if he ever had sex, he said that he was once in love with a Portuguese girl but when she looked at his penis, she shrieked, “Where is the rest of it?” and ran away. That’s when he decided to stop dating and enter the seminary and become a priest so that he would never be made fun of again. One of the guys quipped, “So that’s why there are so many Irish priests.” He insists he is happy and feels he is being helpful, adding, “and, I’ve never molested little boys.”

As the meeting is about the end, Keiran decides to tell his story. He is a roofer from Dublin who’s been in America for four years. He met a girl at NYU and they fell in love and are to be married in a few days. He is still a virgin and is terrified that when she sees his “willy,” she will leave him. His girlfriend Kelly has been pushing for sex but, “Like most Catholic girls, I had to put her off.” He has been overwrought and has been contemplating doing away with himself. The group reassures him that she loves him and that the size of his “willy” will not matter to her. While the problems from which they all suffer because of their miniscule appendages have not been solved, all have had a slight breakthrough at this meeting and they vow to return next week. Even the skeptical Keiran says he’ll return after his honeymoon.

The director has assembled a brilliant ensemble of professional, highly skilled actors, each of whom gives a powerful, multi-layered performance, and like the onion analogy, systemically peels away layers and layers of their characters revealing the pathos lying within each of them. Although laugh lines abound throughout the play with a particularly funny riff on ethnic stereotypes as to which groups are hung and which groups are not, underneath the jokes and hilarious one-liners lies a metaphor about how we are tormented by feelings of inadequacy due to a physical or mental deficiency, whether perceived or real. The language is definitely “R” rated and while you laugh a lot, you might also get a tear or two as you see the pain the Irish curse has rained down upon these men. The Irish curse may be a curse, but this production of “The Irish Curse” is a theatrical blessing.