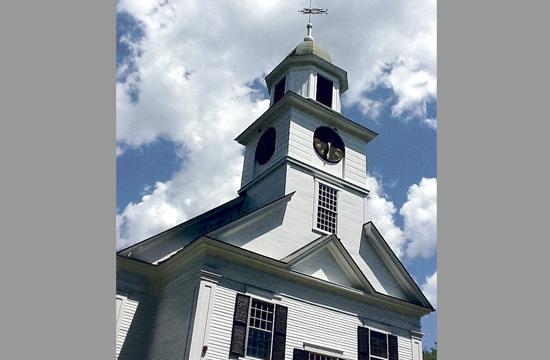 From my pew in the choir loft of the First Congregational Church on Thetford Hill I looked at the comfortable, timeworn church, mismatched chandeliers hanging over the sanctuary, on the pulpit a solitary candlestick holding a lighted candle. I was there to give witness to the annual “Ringing of the Bells.”

“The oldest tradition established in the United States is the ringing of bells on July 4. Minutes after the signing of the Declaration of Independence, the historic Liberty Bell rang out the good news: the United States was a free country. That happy moment had been awaited under high tension by most of the inhabitants. When the Liberty Bell rang forth, thousands knew that the deliberations had been completed, and they now lived in a free land. Other bells soon picked up the good news, and as the sound was heard, a chain of bells carried the news (across the new country). Thus began the tradition of bell ringing, which has been kept in many places, including Thetford Hill, ever since.” — William E. Worcester, Thetford Vermont 1980.

At about 11:30 p.m. on the evening of July 4, 2012, 47 people, dressed in ‘Vermont casual,’ gathered in the choir loft to celebrate the 236th anniversary of the United States. Some had come by car while some had walked up the hill carrying candlelit lanterns to light up the night. The lanterns had been placed on the rails of the choir loft and gave soft illumination to the sanctuary below. Pilgrim Hymnals and copies of the Declaration of Independence were in front of the pews.

Each person, by turn, read aloud from the Declaration of Independence until it had been read in its entirety. Each voice giving strength and meaning to words written 236 years ago. It was a serious moment of passing the values of one generation to the next as the children of the community of Thetford learned the values of the nation from their families and their neighbors.

“We hold these truths to be self-evident, that all men are created equal, that they are endowed by their Creator with certain unalienable Rights, that among these are Life, Liberty and the pursuit of Happiness. That to secure these rights, Governments are instituted among Men, deriving their just powers from the consent of the governed.”

When the reading was complete the community turned to the Pilgrim Hymnal to sing three verses of America the Beautiful, accompanied by the organist, Mrs. Alice Pierson, at 93 the oldest of the bell ringers present.

Couples and families stood together to sing, blending high and low voices. The meaning of the words made new again by the strength and caring in the singing.

At midnight the church bell, created long ago by a foundry in Troy NY, tolled 12 times. Each person then took a turn pulling the bell rope and when done went outside to the Town Green in order to better hear the clear sound of the pealing of the bell, 236 times, once for each year of our nation.

With the last sound of the bell, the group returned to the choir loft to sing “My Country, tis of Thee,” also in the Pilgrim Hymnal, and the Woody Guthrie song, “This Land is Your Land,” with the words printed on a handout. After appreciation and applause for Mrs. Pierson, cookies were shared and everyone headed out into the pleasant night air of the Vermont summer.

“The Unanimous Declaration of the Thirteen United States of America, July 4, 1776,” The Declaration of Independence, is the founding document of the United States. Fifty-six men, representatives chosen from each of the thirteen colonies, signed the Declaration. I looked at the names of the men who signed, among them two men who were to become U.S. Presidents, John Adams and Thomas Jefferson; the inventor and Statesman Benjamin Franklin; and, of course, John Hancock.

Without the public reading of the Declaration I wouldn’t have remembered the final and solemn words, “…we mutually pledge to each other our lives, our fortunes and our sacred Honor.”

I thought about those men, wondered at what it might have been like to sit among them, marveled at their bravery and was reminded that it is my responsibility, our responsibility, to pass on to the next generation a belief in the rightness and value of liberty and the obligations of a government to its people.