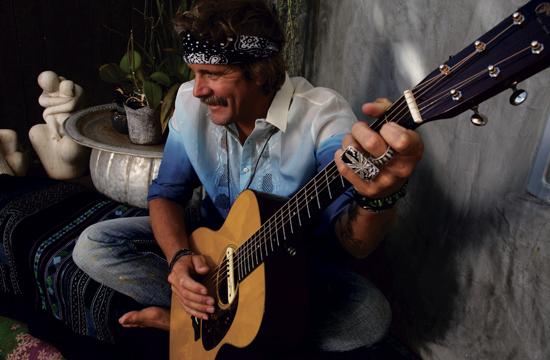 A wave of locals and tourists alike will take to the Santa Monica Pier tonight, July 5 to enjoy the first of 10 shows that will be part of the 28th Annual Twilight Concert Series.

To open the night, Jeff Young’s Song and Dance Society will take the stage around 7 p.m. with an upbeat style that he hopes will set “a party atmosphere” for the return of the series.

“A message of love” will accent the Santa Monica sunset through “familiar songs with a twist of originality,” says Young.

Originally from Mt. Vernon, NY, Young moved to Santa Monica in 1996 to be closer to his work with Jackson Browne at the time. Young would start a family with his wife soon after, and explains that Santa Monica is the best community he has ever lived in.

“I’d like people to know how much I appreciate the diversity, weather, and the oceanfront,” he says.

Influences from Young’s work with Jackson Browne, Steely Dan, and Sting can be heard in his 2004 title track “Soul Pharaoh,” among other songs on his newest album “Pure Herringbone: Songs from the musical One Hit Away,” released in 2010.

Young spends a lot of time on his work for Malibu Sound Music Production, where he holds the roles of musical director, producer, and primary composer. The production company tries to offer exposure and support to musicians through a wide variety of services.

Young explains that “a good band is a terrible thing to waste,” and seems to enjoy his opportunity to help others succeed with a shared passion in musicianship.

The sounds of surfer/songwriter Donavon Frankenreiter embody the soul of true beach culture. With new music that reflects on the life he has built for himself and his family on the Hawaiian island of Kauai, Frankenreiter seems ideal to headline the coast-side kick off.

“I will play anywhere that has to do with Heal the Bay or cleaning up oceans and beaches – that is something that the whole world needs,” he says in regards to community-based appearances.

A Southern California native, he broke into the professional world on a surfboard. With a sponsorship from Billabong, Frankenreiter moved to Hawaii and befriended (unknown at the time) musician Jack Johnson.

For Frankenreiter, music was just a hobby for the young surfer. He and Johnson would practice guitar and write music in their spare time. While Frankenreiter was in a small band in his late teens called Sunchild, it wasn’t until 2002 that he decided to pursue a more serious solo career.

Frankenreiter released a new nine-song album earlier this year entitled “Start Livin’.” The album is an untraditional approach to making music, as the artist utilizes uncommon instruments like Zippo lighters, pots and pans, and a tight-knit ensemble of solely his bassist Matt Grundy.

Frankenreiter and Grundy have worked together on previous albums, and the duo seems well in sync. Songs like “Same Lullaby,” and the title track of the new album exemplify this symbiotic harmony.

Frankenreiter expresses his jubilation in performing at this summer’s concert series.

“We will be jamming at one of the most beautiful times of the day for one of the greatest causes,” he says. The artist will perform songs off of all five of his albums, and even a few surprises.

Not to worry, contrary to the rumors, this year’s concert series will remain completely free. Commuters are advised to arrive a little early and be prepared to pay for parking. There will also be a free bike valet service located just south of the pier.