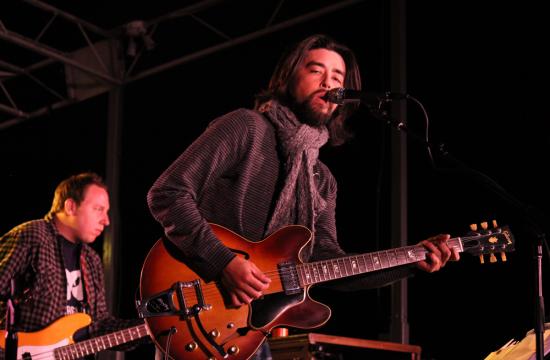 A gorgeous Santa Monica sunset distracted the crowd from a chilly breeze during the fourth night of the Twilight Concert Series on Thursday night.

Two electric guitarists, a bassist, a drummer, and an acoustic guitar-playing vocalist compiled the group Me and Heath. The young band normally enjoys a residency at Rusty’s Surf Ranch on the Pier, but were the winners of this year’s “Emerging Artist Competition.”

With the chance to open for the acclaimed Jackie Greene at stake, lead singer T.J. Runnells and his band dismantled their competition.

Me and Heath opened the night with some fun-spirited and up-beat tunes. While their frontman didn’t lack an ounce of enthusiasm, the rest of the crew fell a bit short when it came to matching his energy.

With an alternative rock ‘n’ roll style, and slivers of ska and hip-hop, the band classifies themselves as “acoustic hip-rock.”

The second song of their set, “High Hand” sported lyrics that speak to a general audience on more than what met the ear. “People are dying, but they’re not trying to live,” sang Runnells.

As a Colorado native, he dedicated the song to the families and victims involved in the recent movie theater shootings.

“We get caught up in our everyday life, and you never know when you’re going to have it taken from you,” Runnells explained. “Smile and live it to the fullest.”

A cover of the Beatles’ “Come Together” in Me and Heath’s funky style lightened the mood, and got people dancing.

Finally, the penultimate song of their set heaved animation from all members. A punk-infused rock session with mellow drum breaks created the right ambiance for the next act.

As the sun went down, Jackie Greene came up. He aroused the welcoming listeners in a fluffy fleece knit, and woven farmer’s hat.

“I’d like to start you off with something a lil’ mellow,” said Greene.

His first song “Uphill Mountain” possessed simple lyrics, and a calm but controlled delivery. A commander of the guitar and harmonica, Greene’s poise was professional.

The veteran would go on to present a few Grateful Dead covers. “Don’t be afraid to dance now,” he said.

While folk music has traditionally been associated with an elder demographic, many young folks were caught grooving amidst their families.

“Kids are getting into their parents’ record collections, they’re doing their own discovery process and the internet makes that easier,” said Greene. “Kids might just be getting sick of b.s. pop music.”

Greene understands that music brings all types of people together. And after twelve years as a musician, he has acquired quite the stage presence.

Greene displayed an arsenal of abilities. For three songs, he traded places with his pianist and took to the keys like a writer at his desk.

Before succumbing to an encore of Jerry Garcia’s “Sugaree,” the singer received a gleeful response to his own “Shaky Ground.”

During “Tell Me Mama, Tell Me Right” an infectious feeling grasped the masses. Parents embraced their children, and lovers kissed.

Revelry stirred up the crisp air, and served a night to remember.

Catch Greene on tour with his band this coming fall, and tune in for next week’s Twilight Concert on August 2 featuring Australian singer/songwriter Kasey Chambers.