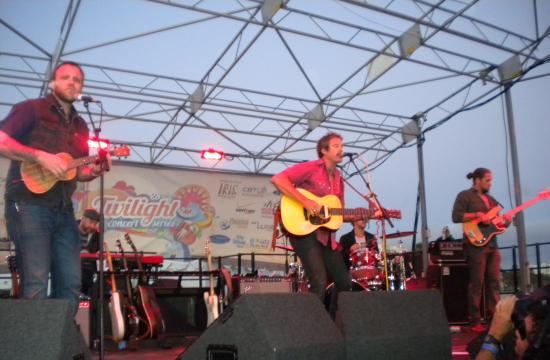 Expectations were met after Mayor Richard Bloom delivered thanks and turned the mic over to Jeff Young and the Song and Dance Society.

Australian singer/songwriter Dannielle DeAndrea opened with a solemn yet powerful rendition of Ella Fitzgerald’s “Blue Skies.” The vocalist took a step back to draw in the crowd and express a vulnerable moment about one and half songs into the groups’ set.

“I’m a little nervous,” she said to pianist and vocal counterpart Jeff Young.

DeAndrea seemed to turn her nerves into energy, and had no problem engaging the crowd with her eloquence and stage presence after that.

“When I first moved here, I was very scared because I was starting again in a field that I’ve been in for 20 years,” explained DeAndrea. “But I find that when I go home to Australia now – since we love the American and English music style so much – I have gained credibility.”

Jeff Young led his pact through a medley of new material, older songs influenced by his work with artists like Jackson Browne and Steely Dan, and even invited his friend Vonda Shepard to sing a couple with the crew.

Shepard was known for her recurring role on the TV series “Ally McBeal” as a resident bar performer.

“I was working with Jackson [Browne], and the woman that he normally hires to sing background vocals was Valerie Carter. Valerie was working with James Taylor at the time, and suggested Vonda to us,” said Young. “It was through Vonda that I met my wife.”

Shepard wore a wavy black dress that flowed in the Santa Monica breeze as her raspy voice bellowed a convincing cover of Aretha Franklin’s “Chain of Fools.”

With the exception of his son and bassist Skyler, Young explained that this group – DeAndrea, guitarist Mark Goldenberg, and drummer Mauricio “Fritz” Lewak – had worked together in Jackson Browne’s rhythm section in the past.

“There’s something about the Song and Dance Society, it’s kind of a musical bond between these guys,” said Young.

Donavon Frankenreiter took the stage around 8:30 p.m. equipped with his iconic mustache, and the crowd gave a warm welcome. In between a melange of new and old material, the artist expressed his gratitude for an invitation to the event, giving praise to certain promoters and organizations.

“These free concerts on the Pier are incredible, everybody was so happy and peaceful,” said Frankenreiter. “I had never been to one of these, it was very enjoyable.”

A gregarious Frankenreiter and his Jack Johnson-esque sound kept the performance funky and fresh. And when his bassist Matt Grundy pulled a harmonica out of his bag of instrumental trickery during “What’cha Know About,” fans went wild.

Grundy also wowed the crowd with an array of instruments like the Ukelele and Banjo, yet he and Frankenreiter are notorious for even more curious weapons of resonance.

The antics didn’t end there as the whole group – Grundy, Frankenreiter, pianist Paul Clark, drummer Sean Macaulay, and bassist Jared May – erupted in a garage band rock session during the song “Move By Yourself.” The heavy rock ‘n’ roll tone echoed off the ocean break to sum up a beautiful kick off to this year’s Dance Series.

Just as the night was coming to a close, Frankenreiter turned his finale of “It Don’t Matter” into a true sing-a-long. Lobbing his microphone like a lasso to a bright-eyed fan in the front row, and the young woman surprised the audience with a confident delivery.

“I threw it to her, and she caught it. The rest is history,” Frankenreiter said with a laugh.

The Twilight Dance Series continues next Thursday, July 12 with The Mighty Diamonds and The Lions.