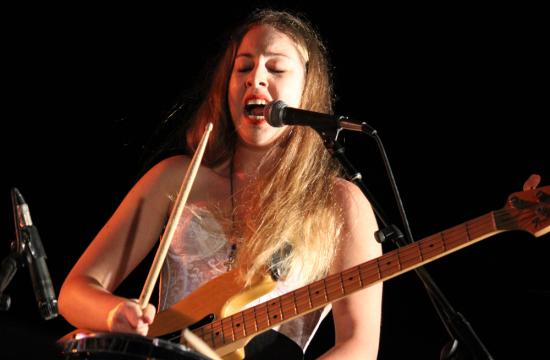 The sun painted a clementine background as two up-and-coming indie rock groups warmed up their vocal cords on the Santa Monica Pier on Thursday.

Two trios – Wildcat! Wildcat! and HAIM – performed as part of the third night of this summer’s Twilight Concert Series.

A slow but steady flow of patrons took to the wooden deck and sand below, while a flurry of tents setup shop to promote their various products.

Guests were ready to be transported from the hot summer scorch into the world of resonance when KCRW’s Valida Carroll greeted the crowd.

“Los Angeles has always nurtured its share of music, and we like to nurture that music,” said Carroll, opening the stage to the night’s first act.

Wildcat! Wildcat! took the stage equipped in brightly colored garb and a comfy L.A. style. Vocalist and guitarist Jesse Taylor sported a pink singlet with a Kevin Bacon profile imprinted on the front.

“Sometimes the Bacon has to come out,” joked Taylor.

The band’s comfort with live performances could be seen through their passionate presentation. And an ease with one another is understandable considering they have known each other for fourteen years.

Though the three have only released a few songs at the moment, they managed to fill their session admirably, and delivered a memorable show. A cover of Tears for Fears’ “Everybody Wants to Rule the World” set in Wildcat! fashion represented a wide range held by the guys.

And when they chimed out their hit “The Chief,” even a few media personnel caught themselves swaying to the melody.

Wildcat! Wildcat! is gaining a following and has landed a residency at The Echoplex in Echo Park on Monday nights. The humble cats were grateful.

“It was a beautiful night, and we don’t get to play on a beach very often,” said pianist and vocalist Michael Wilson.

They presented the headlining band kindly: “next is HAIM, and they are gonna destroy you guys.”

The three sisters of HAIM blew up the stage just as darkness fell. A cool summer breeze teased the girls’ hair in classic rock star style.

The group promptly began their set at 8:45 p.m. in front of a sizable entourage of fans, friends, and family – an ideal booking for the series.

The three vocalists harmoniously played their original pieces, and compiled a considerable set full of energy.

“I’m a little nervous. This is kind of a big deal for us,” said the eldest sister Este. “But it’s Westside for life.”

The sisters seemed perfectly in sync and gracious in each other’s presence. They joked, and thanked their parents and friends between tunes.

“We’ve pretty much been a packaged deal since we were born. Other than being a family, we’re best friends,” explained Alana, the youngest sister, vocalist, pianist, and co-percussionist.

A diversity of instrumental abilities were found on stage within the HAIM girls and their drummer Dash Hutton.

A hip-hop inspired song called “Go Slow” held remnants of Adina Howard’s “Freak Like Me.” And a cover of Fleetwood Mac’s “Oh Well” got everybody in the mood.

The girls’ music is pure and sexy, but not over the top. They illustrate the journey into adulthood and professionalism that we all endure.

After testing out a new song with the audience, HAIM let out a thunderous sound they entitled “Let Me Go.” The song possessed a hard guitar riff, brawny bass, and finally a congo drum session that knocked down Este’s mic stand. A grand finale.

The ladies will be touring with Mumford & Sons throughout August in their Gentlemen of the Road Stopover Tour.