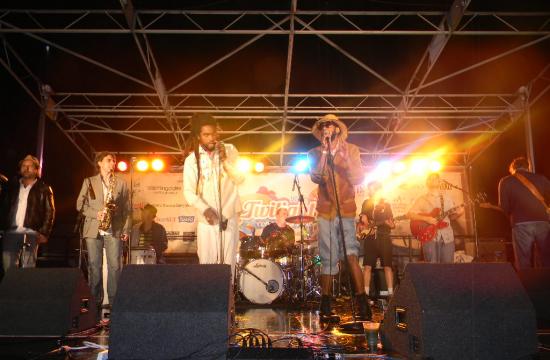 Despite a steady drizzle Thursday night, thousands of onlookers came to enjoy live reggae music at the Santa Monica Pier for the second performance night of the Twilight Concert Series.

To introduce the night, KCRW’s Jeremy Sole delivered news that the scheduled headliners The Mighty Diamonds were not going to be in attendance. According to Sole, The Jamaican dub-masters apparently had “complications” in their travels.

The mishap placed The LIONS, who were scheduled to open the show, in a headliner position. And an impromptu booking gave the stage-opener to another Los Angeles-based group, Arise Roots.

“We found out this past Monday to be on alert, and it wasn’t confirmed until Tuesday,” said Arise Roots’ lead singer Karim Israel. “I’m amazed that it just fell in our laps like that.”

Performing for a slightly larger crowd than last week, Israel and the rest of the Roots began jumping around on an already slippery stage.

“Santa Monica how ya feelin’ out there?” Israel asked the audience behind his dark shades and long dreads. “Are you feelin’ it?”

A cover of the legendary Bob Marley’s “Pimper’s Paradise” set the tempo for a strong and passionate deliverance.

The group would go on to play mostly all original music that will be featured on their first album (still unnamed) set to drop by the end of summer. And as they chimed out their hit, “People Are You Ready,” the rain lightened up.

Arise Roots will be taking some time off between now and Labor Day to finalize their album. Their next performance will be on Sept. 1 in Hemet, CA alongside Glen Washington, Luciano, Daniel Marley, and a few others.

Clouds didn’t show quite as much compassion to The LIONS, and bullet-sized drops of rain fell as they took the stage around 8:45 p.m.

The headliners didn’t waste any time, prancing right into a highly energized mash-up dub cover of The Temptations’ “Just My Imagination,” Billy Stewart’s “Sitting in the Park,” and The Delfonics’ “La La Means I Love You.”

Families found shelter, while true Rastas seemingly had no problem with the summer-night sprinkle.

The mic was passed around between the band’s three different vocalists, as all twelve LIONS roared on through the rain, denying the weather’s burden.

During “Soul Rebel,” one band member nearly slipped and fell from his excited bounce.

Eventually the stage itself would become a hazard, and at about 9:30 p.m. the performers were asked to finalize the night. “We gotta get out of here before we get electrocuted,” proclaimed Moore with a gracious bow.

The LIONS have a full summer of bookings to look forward to, and a California tour on the horizon.

“In the live band there’s twelve touring, but we have kind of an extended family with some other dudes,” explained producer and guitarist Dan Ubick. Their new record, “This Generation” will be released under Stones Throw Records in the beginning of 2013.