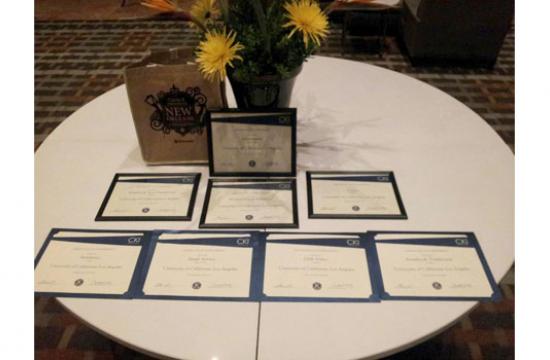 Members from Circle K clubs worldwide came together for five days, where they received leadership training, participated in educational workshops and forums, and received recognition for their achievements over the past year.

The Circle K at UCLA placed in all nine award categories at the International Convention for which it applied, placing first in five categories. The club was awarded first place in Gold Division for Club Achievement, and first place in Diamond Division for Growth Enhances Membership (G.E.M.) Award. UCLA has placed first in Club Achievement at the international level for four of the past five years.

The club won third place for Newsletter, accomplished by 2011-12 Publications Chair Jennifer Lai, and second place in Club Video, thanks to 2011-12 Technology Chair Rich Ung and the members that participated in the video. In the category of Single Service, UCLA was awarded third place in Gold Division for outstanding single service project, achieved by 2011-12 Pillow Fight Chair Tami Bi for her hard work in chairing the club’s annual Pillow Fight event, which raised more than $3000 for Alexandria House, a transitional women’s shelter in Los Angeles.

“I’m extremely proud of the 2011-2012 board and of their accomplishments. We wouldn’t have won all those awards without each and every one of them,” said Neil Yonzon, 2011-2012 President for UCLA Circle K. “I was ecstatic reading all of the Twitter updates from our district governor and how our club placed in every award we applied to. Many of us 2011-2012 board members are happy with all of our accomplishments and what we left behind, so it was a major plus when we got recognized for our work internationally.”

“We more than doubled the size of our club this year,” Yonzon added. “Reaching 200 paid members. We performed more than 8000 service hours and raised more than $5000 for various charities, so I thank all of our club members for their dedication and commitment to helping our club be so successful.”

Circle K International (CKI) is the premier collegiate and university community service, leadership development, and friendship organization in the world. With more than 12,600 members in 17 nations, more than 200,000 hours of service are performed each year.

Chartered in 1974, UCLA’s Circle K falls into the California-Nevada-Hawaii district of the organization, where over 2500 members serve the community and raise funds for charities.