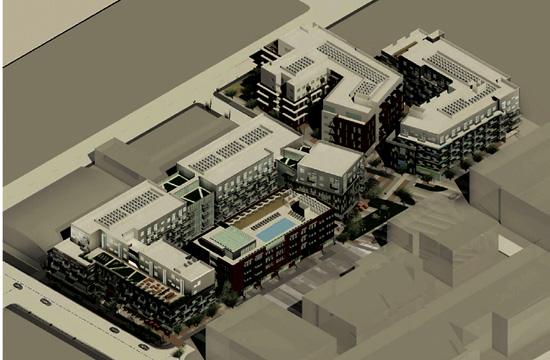 Santa Monica has made national headlines before, so it is no surprise that the future of Village Trailer Park (VTP) was covered in publications across the country. Even a news outlet across the pond in England dedicated a decent amount of ink explaining how a proposed mixed-use development would mean the “end of an American era.”

Closer to home, one resident said the proposed project at 2930 Colorado Avenue did not promote neighborhood conservation per the Land Use and Circulation Element (LUCE), but instead “neighborhood destruction.”

The resident’s observations were made Tuesday night during the public hearing segment of the development agreement (DA) deliberations at City Hall, as Santa Monica’s council members met to determine whether developer Marc Luzzatto can proceed with his plans to convert the VTP from an aging trailer park into a modern mixed-use project complete with apartments, condominiums, office units, park space, and more.

Tuesday’s deliberation lasted about five hours and was even interrupted by a fire alarm. The only thing missing from the extended VTP deliberation: a decision.

By the time the public comment segment came to an end almost an hour into Wednesday morning, council members pondered whether they had enough left in the tank to reach a fair consensus in what is probably one of the most sensitive matters to reach the dais this year.

Council member Kevin McKeown joked that since the dais already allowed the July 24 meeting to spill from Tuesday night into Wednesday morning, perhaps another motion would have to be voted on to extend the meeting through Thursday morning in order to give the six council members present enough time to deliberate the future of the VTP.

Joking aside, the proposed DA, if approved, would replace a handful of mobile home residences with 438 residential units, 20,860 square feet of retail space, and up to 5,085 square feet of ground floor creative space. Factoring in all of the elements of the proposed project, the total development would be 378,460 square feet in size.

In respect to the project design changes in response to the Planning Commission’s recommendations, Luzzatto adjusted the project to include 3,400 square feet of green open space at the intersection of Pennsylvania Avenue and New Road; establishing a minimum 30-foot separation between each building; adding significant building articulation and roofline variation to Building B; modifying the design of the project along Pennsylvania Avenue to increase the building step backs; and revising the unit mix to increase the amount of one-, two-, and three-bedroom units in the project.

With so much at stake, particularly the home ownership rights of the remaining VTP residents, the council agreed to put off making a decision on the DA until at least Aug. 28. On that day, council members will convene a special meeting at City Hall to continue what they knew could not be completed within a reasonable time this week.

Council members hinted they have many questions to ask and they are uncertain whether all of them will even be answered by the Aug. 28 meeting.

With respect to the actual development in question, it is essentially a classic debate of conservation versus progress.

Both sides presented valid arguments, with VTP residents urging the council to protect their home ownership rights and Luzzatto making a case for bringing in a new project that, he believes, will invigorate and update a neighborhood.

The other side of that coin: Luzzatto told council members that maintaining VTP in its current state is not at all sustainable.

“The park is no longer viable,” the developer said, adding that should the council not approve the DA, he would still allow the trailer park to be shut down.

He pointed out that the monthly rents, which range from $300 to $400, is not enough to maintain the trailer park or address its alleged infrastructure problems.

In proposing a new mixed-use project he believed would be a significant upgrade for anyone, including VTP residents, choosing to live there, Luzzatto said he has made every effort possible to accommodate the current tenants. The alternatives include paid relocation or right of first refusal for some of the new units within the proposed project.

Of course, there were several who disagreed. It was not an issue of being offered paid relocation or whether the VTP is viable in its current state. The issue was instead of property rights.

“The problem with the relocation plan is it’s trying to separate me from my home. You can’t legally do that, and neither can (Luzzatto),” VTP resident Catherine Eldridge said.

Making a statement just minutes before the meeting was adjourned for the evening, McKeown said council members must do what they can to find a middle ground that protects the VTP residents but still allows modern development.

He also inferred that the proposed DA might, for all intents and purposes, evict residents who have a legitimate ownership claim in their respective property.

“Evicting the powerless is not the Santa Monica way,” he said. “It’s not just an observation; it’s a call to arms. We really have to try to figure out a way to get through this, that respects the people who live there, and helps the neighborhood and moves toward sustainability.”

In all, about 70-some speakers took to the podium Tuesday evening and into Wednesday morning. Some of the comments were emotional. Others suggested alternative actions. The proposed DA had its clear supporters.

Interestingly enough, McKeown placed one speaker in support of the proposed DA on the spot, revealing only after the fact that she was once an employee for Luzzatto. During her two-minute comment, she had solely advertised herself as a former VTP resident and said Luzzatto’s proposal would be a worthy project for everyone involved. It was only after questioning by McKeown did she reveal that she that she was once a former employee of Luzzatto’s firm, though she also stated she had no intent to mislead council members nor the public.

Another interest point of contention was Luzzatto’s response to the suggestions made by the Planning Commission prior to the DA’s arrival in front of council members.

Both Luzzatto and City staff contended that the DA’s current plans were reduced at the specific direction of planning commissioners.

“The proposed project before the City Council reflects changes made in response to the Planning Commission’s recommendations and represents a reductions of 48 units and approximately 11,500 (square feet) from the project,” the City staff report said.

Commissioners Richard McKinnon and Ted Winterer both refuted, in their official capacities on behalf of the Planning Commission, that citation in their respective comments to the council.

Winterer pointed out that though Luzzatto proposed an 11,500 square foot reduction in the project size, that reduction is only three percent of the entire development.

He also told council members his colleagues on the Planning Commission brought up several other issues during their deliberation that were not addressed in the current presentation.

One of those issues was actually a recommendation that council members take a close look at an alternative plan proposed by architect Ron Goldman. He suggested allowing the current VTP residents – all 58 of them – to maintain their property spaces and have a smaller version of Luzzatto’s proposal built around them on the unused space.

“The Goldman plan is a non-starter,” Luzzatto told council members in response.

What has started quite a while ago was a timer, with the days remaining before a difficult decision must be made. According to a Memorandum of Understanding between Luzzatto and City Hall, there are only about four months left before the park’s closure notice takes effect.

With one month passing before the council reconvenes on this issue, that means there will be even less time remaining in the park closure notice.

The horizon looks bleak for current VTP residents, who can purchase a new mobile home at mobile home park within 50 miles of Santa Monica, including the city-owned Mountain View Mobile Home Park. Residents may also have the title of their mobile home transferred to them as sole owner.

Village Trailer Park is currently home to 58 households, with residents ranging from senior citizens to the disabled. The VTP has space for up to 109 households.