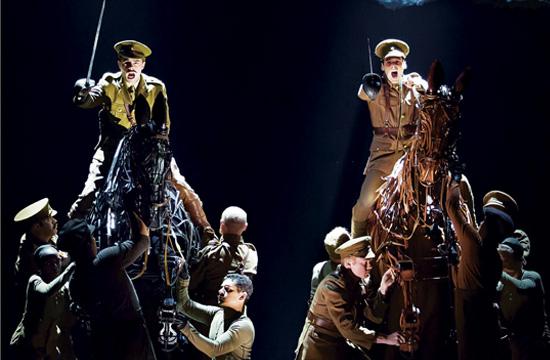 Throughout the history of cinema, war films have been a dominant theme beginning in 1915 with D.W. Griffith’s “The Birth of a Nation” and have included such seminal films as “Battleship Potemkin,” “The Big Parade,” “Wings,” “All Quiet on the Western Front,” “Grand Illusion,” Gone With the Wind,” “Casablanca,” “A Walk in the Sun,” “Twelve O’Clock High,” “The Third Man,” “Pork Chop Hill,” “The Guns of Navarone,” “The Longest Day,” “Lawrence of Arabia,” “Das Boot,” “Gallipoli,” “Platoon,” “Full Metal Jacket,” “Schindler’s List,” “Braveheart,” “Black Hawk Down,” “Apocalypse Now,” “The Bridge on the River Kwai,” and “The Hurt Locker.” Using the technical magic of film and all the special effects inherent therein, each of these films illuminated the horrors of war in its own specific way searing the face of battle graphically into our collective souls.

Now, without the benefit of being able to dice and cut in the cutting room or use computer generated images, with World War I as the backdrop, how do you accomplish telling another compelling war story theatrically, this time centering on the intense relationship between a boy and his horse, while at the same time, depicting the devastation left behind in the wake of battles? The production of the National Theatre of Great Britain’s five-time Tony award-winning “War Horse,” a play based on the book by Michael Morpurgo, and adapted for stage by Nick Stafford, currently the Center Theatre Group’s Ahmanson Theatre, more than accomplishes that goal. “War Horse” is pure theatrical wizardry that left grown men wiping tears from their eyes.

Just before the break out of World War I, Ted, a British farmer (Todd Cerveris) gets into a bidding war with his brother Arthur (Brian Keane) over a foal and in his drunken determination to win, pays for the horse with the mortgage money and thus begins the love affair between young Albert (Andrew Veenstra) and his horse Joey whose wonderful training by Albert eventually saves the horse’s life. Ted’s long-suffering wife Rose (Angela Reed) wonders what they can do with a show horse, but soon is swept up by Albert’s love and tender devotion to Joey. In very short order, Joey burrows deep into your heart and you find yourself worrying about his well being as well.

War finally breaks out and Ted sells Joey to Lieutenant James Nicholls (Jason Loughlin) who promises to take good care of the horse. The good lieutenant is an artist and depicts the battle scenes in his sketchbook that the audience sees as a projection on what looks like a jagged piece of paper. Some of the scenes that take place in the Devonshire countryside and the Somme Valley, are compelling, shocking and definitely leave a taste of war in your mouth. The same can be said for some of the live war scenes in which shells fly across the stage and in a flash of light, a cavalry officer and his horse are dead. Some of those moments will make you gasp. At age 16, Albert enlists in the Army to try to find Joey and there are some heartbreaking scenes as he journeys through “No Man’s Land” with his ill-fated buddy.

Almost too painful to watch are the battlefield scenes where the horses get enmeshed in barbed wire, but ironically brings a moment of humor as German and British soldiers, who are in opposing trenches, join forces to rescue a trapped horse. (As a sidebar, according to Morpurgo, in addition to the 10 million soldiers who were killed during World War I, there were millions of horses who were also killed by barbed wire and machine guns).

Joey’s journey brings him a series of owners one of whom is a German officer, Captain Friedrich Muller (Andrew May) whose protectiveness of Joey is counter to his duties as an officer. It should be noted that a delightful goose puppet scoots across the stage from time to time providing much needed comic relief.

Although the ensemble is comprised of very fine actors, the real stars of this spectacle are the astonishing puppets created by Handspring Puppet Company and operated by a team of extraordinary puppeteers who seemingly disappear as our rapt attention becomes riveted on these life-size, transparent horses made of wires, wood, leather, cloth, and gears. These puppeteers capture every nuance and subtle characteristic from an ear twitch, to snorts, to smelling or poking the ground and breathing, to how the horses rear up when they are frightened or annoyed, wag their tails and how they eat or drink. We take this emotional heartbreaking journey with Albert and Joey as well as the officers and their steeds until the dénouement that will allow you to leave the theatre with a deep sigh and a smile on your face.

A play of this magnitude must be supported by an extraordinary technical team and that is evident throughout this remarkable production. They include: U.S. Tour Director: Bijan Sheibani; Puppet Design, Fabrication and Direction: Adrian Kohler with Basil Jones for Handspring Puppet Company; Director of Movement and Horse Choreography: Toby Sedgwick; Sets, Costumes and Drawings: Rae Smith; Original Lighting: Paule Constable; Music: Adrian Sutton; Sound: Christopher Shutt, and Fight Director: Tom Schall. Adding to the narrative, as a two-man Greek chorus, is John Milosich who sang lovely English folk songs, accompanied by Nathan Koci on the accordion.

Sometimes it’s difficult to marry an epic tale while at the same time developing the emotional relationship side of the story, but “War Horse” manages to do both – to illuminate the devastating effects of war while at the same time, never losing sight that despite man’s inhumanity to man and yes, beast, the power of love and devotion and determination can trump tanks and flying bullets.