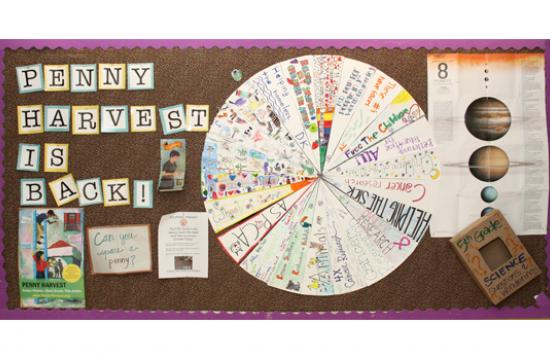 This year-long service learning project incorporated active research on social issues, practical math applications, grant proposal writing, and an opportunity to give back to their local community.

KaBOOM! is a national non-profit dedicated to saving play for America’s children.

Its mission is to create great play spaces through the participation and leadership of communities. Ultimately, they envision a place to play within walking distance of every child in America.

By creating more play spaces in the community, KaBOOM! is helping to create healthier, happier, and smarter children, greener cities, better schools, and stronger neighborhoods. To date, KaBOOM! has built more than 2,000 playgrounds, saving play for more than 5.5 million children.

The Penny Harvest project is in its fourth year at Westside Neighborhood School, and has two phases.

Phase one consists of engaging the entire school in brainstorming about important social issues and philanthropy.

In October, the fifth graders presented the project to the entire community at a kick-off assembly.

The idea was to involve all the students, faculty and parents.

Each class met individually to determine how they thought the money should be spent and then shared their ideas with the entire school.

Children are asked to gather pennies and other loose change.

The coin collection took place during the month of November. Students, parents, and faculty brought change to school to place in the collection bags.

After the money was collected, students sorted the change and did preliminary amount estimates using their understanding of ratios. The bags of coins were sent to a local bank for an exact count.

Phase two is the heart of the program where students formed philanthropy roundtables.

This phase gave children the power and freedom to decide how to spend the funds.

Fifth grade students sat on roundtables to study community problems and determine which organizations needed the most help. They then made the decision of which organization would receive their grant. This year it was KaBOOM! In past years, organizations such as Heal the Bay received grants through the Penny Harvest project.

The Common Cents Penny Harvest grew from one child’s desire to feed the homeless in New York City in 1991.

Since then children between the ages of four and fourteen have been converting their natural compassion for others into action by collecting pennies and turning those pennies into grants for community organizations. More than $5 million in grants have been donated by children since 1991.