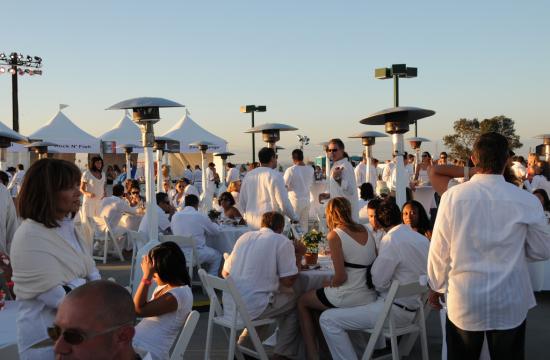 More than 1,000 people are expected to come together this Saturday, July 21 for an entertaining, yet meaningful evening to raise money for local non-profit Walk With Sally as part of the organization’s sixth annual White Light White Night gala.

King Harbor in Redondo Beach will be transformed into a sea of white for the event, as supporters from across the country will sample bites from some of the South Bay’s best restaurants, enjoy a cocktail from Patron’s famous Ice Bar, and bid on the evening’s premium silent auction, whose proceeds go directly to Walk With Sally’s programs. In addition, guests will be treated to a live performance by musical guest Smash Mouth.

“Each year, White Light White Night serves as an opportunity to share the stories of the hundreds of children in Los Angeles who get lost in the mix when a loved one is diagnosed with cancer,” says Nick Arquette, founder of Walk With Sally. “This event gives those children a voice and allows us to fund existing and new friendships with mentors. Without the support of our community, we would not be able to impact those children’s lives the way we’ve been doing during the last five years.”

Last year’s White Light White Night event raised more than $150,000 for Walk with Sally’s mentorship program for children whose parents or siblings are fighting or have died from cancer. This event hopes to be an equally smashing success.

There are nearly three million children in families affected by cancer in the United States and more than 500,000 minor children, nationwide, living with a parent in the early phases of cancer treatment.

Featured restaurants will include Manhattan Beach’s Strand House, Hermosa Beach’s Hot’s Kitchen and Santa Monica’s Brick & Mortar, among many others. The event will be sponsored by Momma Mia Worldwide for the second year in a row.

For more information or to purchase tickets, visit www.walkwithsally.org.