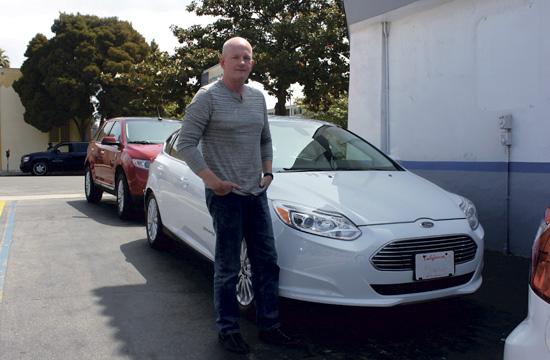 Porsche and Ford are typically not used in the same context. The pure performance automobiles of Porsche typically symbolizes power and speed. However, for Michael Medlock, the decision to trade in his 2011 Porsche Boxster for the 2012 Ford Focus Electric at Santa Monica Ford made him one of the first owners of the vehicle in Southern California.

Many people might not be able to imagine trading in a 250 plus horsepower sports car for a 143 horsepower all-electric vehicle, yet the Beverly Hills resident recently made that trade-in and is happy that he did.

Medlock said he was attracted to the Ford over other electric vehicles as it looked identical to a regular gas powered Focus minus an Aston-Martin like grille.

“The car has an amazing amount of pep and power so it feels very spry,” Medlock said. “And it is virtually silent and as smooth as silk.”

Ron Davis, owner of Santa Monica Ford, said he had to meet several requirements before he was able to qualify to sell the all-electric model.

He first had to add a charging station to the property where people could charge their vehicle for free, which also had to be open to any electric vehicle owner – not just those possessing Fords.

Secondly, Davis said his staff had to undertake special training to receive certification, as it is a “completely different vehicle from what we have sold before.”

This included learning about the technology behind the car, what it means to consumers, and how driving habits differ between gas powered engines and electric motors.

Finally, a green review of the entire dealership had to be completed to assess the power and energy usage on the lot.

Davis said the dealership had to reduce power usage by changing to more energy efficient lighting and installing automatic timers on the air conditioner units around the facility.

Also, the Ford dealership had to examine the driving habits of its employees and create a carpool system.

“The City of Santa Monica is already trying to install a carpool system anyway, but we made an extra effort during our certification process,” Davis said.

The vehicle’s single speed transmission is connected to an electric motor that puts out 184 lb-ft of torque that is available instantly at the press of the “gas” pedal.

The Focus Electric has a 110 miles per gallon equivalent using the power of electricity. The factory specifications list a total distance of 80 miles on a single charge.

“We are helping the environment and accommodating consumers in our specific market,” Davis said. “It is a unique market and people here do what they can do improve the ecology and we are in sync with that market here by providing this vehicle to them.”