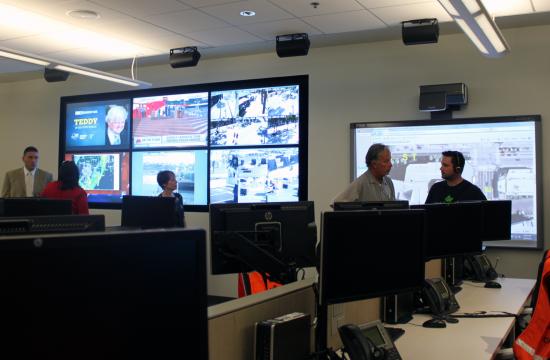 Newly upgraded over six months at the cost of $400,000, the facility is ready in time for the annual September event of Emergency Preparedness Month.

The new equipment includes the capability of tapping into any one of 300 cameras placed around the city and viewing it on the multi-screen video wall, as well as being able to look at pending police calls around the city and searching for available police units.

In addition, a new center will bolster the city’s communication abilities in time of emergency.

“Communication is paramount in any emergency or any large-scale event that’s going on. The information that’s going to go out to the community is going to be created in the new IPO center,” Emergency Manager Lt. Kenneth Semko said during the presentation.

“They have all the software that they need to accurately write their press releases and very importantly, to put out social media information. We’ve learned, in the last couple years, that social media is a way that people communicate.”

New Geographic Information Systems (GIS) will enable staff to create detailed maps with symbols, indicating what events are going on around the city. Those maps can then be projected to the screens lining the wall.

The facility is also equipped with a video conference room.

“The video conference room gives us the capability with a large screen TV and wide angle lens to sit down at a conference table and speak live via video chat to virtually anyone in the world that has an Internet connection and a camera,” Semko said.

All of the technology is backed up by three generators that are capable of operating everything independently in the case of a power failure. The room is also equipped with 24 feet of whiteboards to rely on if the technology fails.

City manager Rod Gould, who likened the newly renovated EOC to being on the bridge of the Starship Enterprise, said the new technology is only the beginning.

“In the past 12 months we’ve made real strides…we’re learning, but we’re not there yet. We must get very comfortable using its technology, its capabilities…and when those capabilities are not available, knowing what next to step in to. And it has to become second nature to us,” Gould said.

“We have to practice, we have to train, and we have to get very, very good at it. And that’s our commitment.”

The Emergency Operation Center is located inside the Public Safety Facility at 333 Olympic Drive in Santa Monica.