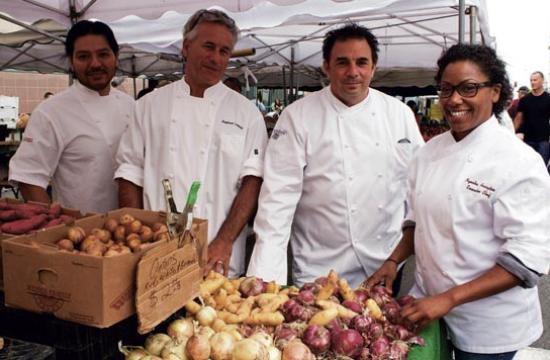 Three big events anchor the festival: Lexus LIVE on the Plaza with Wolfgang Puck & Friends on Saturday at 7 p.m. and the Lexus Grand Tastings on both Saturday and Sunday at noon in Downtown LA.

In Santa Monica, the LAFW will join forces with the Santa Monica Chamber of Commerce and the Santa Monica Convention & Visitors Bureau tonight to create two distinct events at the Fairmont Miramar Hotel & Bungalows celebrating the flavor and personality of California’s celebrated beach city.

The Summer at the Shore reception tonight at 6:30 p.m. under the Fairmont Hotel’s iconic fig tree will feature 16 chefs and pours from more 150 wines.

Indulge Santa Monica will be held at the same time in the Fairmont’s grand ballroom and feature three of the city’s most prominent chefs: Host Ray Garcia of FIG, Joseph Miller of Bar Pintxo, and Raphael Lunetta of JiRaffe. They will create a multi-dish dinner highlighting fresh seafood and seasonal ingredients from the local Farmers Market.

In addition, this year’s LAFW revives the Celebrity Chef Power Lunch Series, bringing together dynamic duos today at some of the city’s hottest restaurants.

They include Michael and Bryan Voltaggio at Ink; Scott Conant and Michael Chiarello at Scarpetta; Joachim Splichal and Hubert Keller at Patina; Ari Rosenson and Lydia Shire at CUT; Wolfgang Puck and Charles Phan at WP24; and Nona Sivley and Kerry Simon at L.A. Market.

In Downtown LA, Asian Night Market tonight at 7 p.m. will be hosted by Andrew Zimmern and will feature tastings with Asian-inspired ingredients from some of the nation’s most influential chefs including Roy Choi, Floyd Cardoz, Susur Lee, Ming Tsai, Charles Phan, and Ricardo Zarate.

In Beverly Hills, The Montage will host The Delicacy Dinner at 6:30 p.m. tonight. It will showcase a five-course meal of ultimate indulgence in the hotel’s glamorous ballroom where guests can mingle with celebrities of all types.

In Hollywood, join Susan Feniger and her co-owner/chef Kajsa Alger as they lead a spice class of global proportions at the event Lunch at Street today at noon. They will talk about exotic spices, global cooking, and traveling the world while leading your taste buds on a culinary spice trail from world’s kitchen to their Hollywood restaurant. The session will include a generous sampling of Street favorites, custom cocktails, and wine. Guests will also receive customized spice packets to try global cooking in their own kitchens.

A portion of the Festival’s ticket sales will benefit the non-profit St. Vincent’s Meals on Wheels.

For tickets and information, visit www.lafw.com.